I’m now into my 6th decade on this earth, and I don’t know how much longer I have left to speak with you. Many cases come to light every day of those who die young. Two of our friends, our own age, have left this earth this month. With the sudden passing of our son at eighteen, we have clear proof now that life, as we knew it, can finish tomorrow. 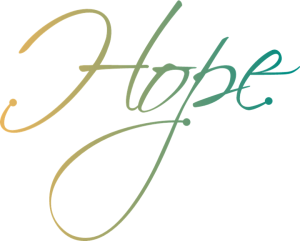 Today’s chapter is all about the HOPE there is in the Kingdom of our Marker, the Creator God who is called by His people as Abba-Father God. It’s in light of the HOPE that He gave to the world, when He unveiled His Global Masterplan, that gives sense and perspective to this portion of Paul’s letter. In fact, without the HOPE of Eternal LIFE, there’s really no reason at all to bother even reading any of the Creator’s script.

Paul, a Jewish religious academic, travelled around the Roman Empire, telling people about the shocking events that had taken place in Jerusalem. Those who now understood the Creator God’s Global Masterplan, needed further teaching on how an incident in Jerusalem, involving a local carpenter, could profoundly affect their everyday lives. 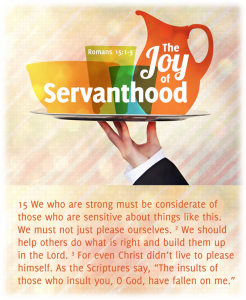 To begin with, Paul called all Believers who would read this letter to bear with/prop up/carry along/help those struggling with weaknesses, and not just live for ourselves. [v1] And, in yesterday’s Breadcrumb, we looked at how something as simple as food can cause problems for those who are already feeling “weak” in their expression of Faith in their Father God. Each Believer is to live for the good of their neighbour – to build them up spiritually. [v2] But the reason behind this, isn’t to do with “religion” and following a religious order of rules.

It is because of what Jesus did for us, even to a point of taking on Himself the consequences of our faults, that we now live in His likeness, helping others. [v3] Created in the likeness of the Creator God, no human in HIStory managed to live up to the standard, except the One who was deemed acceptable.[a] The only One who was proven acceptable when the Creator raised Him from the dead.[b] If we’re to reach our potential (what we were originally designed to do) and live in the likeness of the Living God, we only have Jesus as our example. He gave Himself for me, now I want to live by His example. But in a world awash with theories of how to live in the right way, what HOPE do I have and where do I start?

I need to go to my Creator God’s Handbook for LIFE because, whatever was written in earlier times, was written for my instruction ….even in the 21st Century. Why? Because if I persevere (if I read through it from start to finish, even when I don’t ‘get it’ and want to give up) the encouragement found in the Creator’s Script will give me HOPE. [v4]

But the Creator wasn’t just thinking of us alone. In our modern culture of individualism, we generally read our Maker’s script and wonder what’s in it for us. Our Maker thinks collectively. His HOPE for us is that, as His family, we gain perseverance and encouragement from His Handbook. We’ll (as a group, no matter where we are in the world or from what background) be of one mind, with one accord (one harmonious agreement worldwide), and one voice, bringing glory to the One who made is to be like Him. [v6] 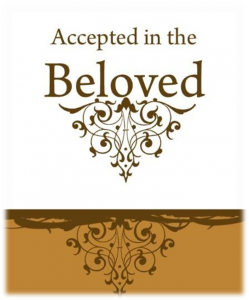 Therefore, with all that in mind, we need to accept one another just a Christ accepted us. [v7] Now, here’s a place where our current culture has brought in buzz words like “acceptance” but using it outside of any connection with the Creator’s Handbook. At the time when Paul first wrote this letter, Jesus had left the earth in recent years. From the time that John the Baptist first stepped out onto Centre Stage, calling out “Repent for the Kingdom of God is near!”[c] and right through the lifetime of Jesus, anyone who wanted to “repent” was accepted.

The first to be welcomed in from the Jewish community, were the “tax collectors and sinners”.[d] In the culture of Jesus’ day, these were the bottom of the barrel, yet they were first to accept His call into the Creator God’s Kingdom! In Paul’s day, the issue of who’s “acceptable” in God Family, had spread wider to take in non-Jewish people as well as Jewish. However, the HOPE of God’s mercy (extending far and wide, to accept in anyone from any background), was predicted centuries earlier. [v8-12] 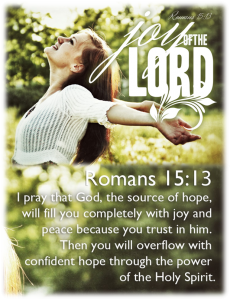 This problem with not allowing certain people into our “inner circle” hasn’t left us. I’m a foreigner in the community where I’ve lived 25+ years, and I still don’t feel accepted. The Creator created the person standing right next to you, and He created them in His own image. All humans must be acceptable in our eyes. If they aren’t, we’re rejecting an image of the Living God and, therefore, rejecting Him. The God of HOPE wants to fills us all with joy and peace in Believing. Why? So that we’ll abound in HOPE by the power of His Holy Spirit in us. [v13]

This is the message of our Father who made us. Every one of us have the capacity to be acceptable because He created us. The confusion in our modern culture has come from their definition of acceptance. We are all acceptable as images of the Creator God Himself, but if we’re not living in His likeness – as we were created to do – our behavior is not acceptable. Every one of us, once accepted into our Father’s Kingdom, must now accept what it is to be a member of our Creator’s Global Family – then make adjustments accordingly. The goal: to be full of goodness, filled with all knowledge and able also to admonish one another. [v14]

Today, there’s a difference between those who believe that the Creator exists; those who say that they have equal rights to join in and receive the same blessings as everyone else; and those who are priests of the Creator’s “gospel” – His story – sanctified by the Holy Spirit. [v16] There’s a difference between one who believes that God exists, and one who is willing to “repent” (make a 180◦ U-Turn in their thoughts, words and deeds) in order to redefine themselves (whatever that takes) to become part of the Kingdom of Priests, the Creator’s Royal Priesthood, His Holy Nation.[e]

While being welcomed into a Royal Priesthood, as Paul was, carries with it clear behavioral change – obedience by word and deed [v18] – just as any priesthood would require (who would have heard of a Buddhist monk claiming to be a Buddhist monk yet refusing to change his lifestyle to the requirements of a Buddhist monk) there’s great news and, even reason for boasting! [v17] By the Power of the Creator God’s Holy Spirit, Paul saw signs and wonders that accompanied God’s Good News message. [v19]

Father God is interested in answering our prayer, no matter how impossible we may think it is. How many times have you heard someone saying, “It was an utter miracle that…” How often has our Maker defied logic to get us out of our fixes, or saved us from disaster. We pray, “God help…” but then later say “Wasn’t that lucky…” or “How weird is that…” instead of thanking God when we get our answer to prayer. He’s active everyday in the affairs of humankind so that…

“They who had no news of Him shall see, And they who have not heard shall understand.” [v21]

Paul finished this portion of his letter by saying that he’s on his way to Spain and wants to stop off in Rome to see them in person. [v22-29] He also asked for prayer that he’d be rescued from trouble in Jerusalem. [v30-32] From what we know, Paul was rescued in Jerusalem but not in the way that I imagine that he’d hoped.[f] We also know that Paul did go to Rome but, again, I imagine not as he had originally hoped.[g] In fact, after two years of house arrest and living with an armed guard, it’s likely that Paul was executed in Rome. No clear record proves that he ever made it to Spain, as he’d hoped and planned.

So what is HOPE if our prayers aren’t answered as we’d hoped, or life doesn’t turn out as we’d hoped it would. My hope is in the “share of spiritual things” [v27] – the blessings that the Creator God has promised long ago.[h]  And what greater blessing to HOPE for, than to know my Makers and be drawn into His Kingdom through His Global Masterplan. This has been His HOPE for you, and it’s been His dream for us all from the Beginning…[i]