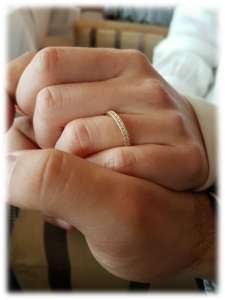 In the lead up to her marriage, I spotted my daughter’s Bible on the coffee table when I came home. It was sitting with Gary Chapman’s book, “Things I Wish I’d Known Before We Got Married“. After asking her what she was reading, my daughter told me about Mark 10, today’s chapter. She’s preparing for the biggest change in her life – a change that will permanently alter the course of her life here on earth – a point from which she’ll never return. But there’s another commitment that’s just as dramatic and yet more important, because it comes with everlasting consequences…

Today’s chapter, from the Book of Mark, has a lot packed into it and, each section is a topic on its own. Now, bearing in mind that the original script didn’t have chapter divisions, what’s covered here is a series of events and all relating to relationships. But before we put ourselves at the centre (as we usually do), and wonder what any of this has to do with ME, I want to draw your attention to something that you may not have noticed.

Today’s chapter begins close on two millenniums earlier. Have you ever wondered why there’s no record of Jesus going to the west coast of Israel?

Shouldn’t He be concerned with getting His message to the whole nation? Well, my guess is that He was tracing Abraham’s steps. Why? Because Father God gave Abraham a promise that he’d be a blessing and that all families would be blessed through him.[a] But Abraham didn’t live to see that his presence in the countryside, moving from place to place, was blessing anyone. Now, however, Jesus (with His “flock” of followers), was moving about that exact same map, retracing Abraham’s movements and blessing everyone with unprecedented healing and deliverance, in a way that the nation had never seen before.

I’m not saying that I’m right, but I won’t be surprised when I get to Heaven and find out that this was exactly what Jesus did, so that no promise of Father God was ever wasted but that every word came true. So then, the underlying layer in today’s chapter could certainly be about Father God (His relationship with Abraham and His outstanding promises to Abraham concerning Israel and the world), and Jesus relationship with Father God, fulfilling His MasterPlan. Since the Creator God doesn’t do random, and everything is hugely significant in His multi-layered plan – HIStory purposefully brings us to v1 in today’s chapter.

The Children of Israel (a couple of million of them) had once stood on the east side of the Jordan River opposite Jericho.

They were getting ready to enter into their promised inheritance under Joshua’s leadership – Joshua means: God is Generous (or generous giver/provider) and God Saves such that the two meanings together are: God provides salvation generously. Now, at that point in HIStory, Moses was about to leave them. So, when Jesus crossed over to the east side the Jordan on his second-last week on earth, He wasn’t wandering about aimlessly. He knew exactly where He was standing in the Creator God’s epic drama. But my guess is that no-one, in today’s chapter, would have spotted the significance of where they were, because they didn’t know where it was that Jesus was heading.

In my country, when you’re going to your funeral, your casket leaves from your family home – your starting point. Jesus was heading to his funeral in Jerusalem, and He started out on that journey on the east side of the Jordan. From what we know of HIStory, and the events that transpired over the next 10+ days, Jesus was at the start of entering into His promised inheritance[b] – just as the Children of Israel were about to enter in, 15+ centuries earlier. Like Joshua, Jesus (whose Hebrew name Yeshua is a variant of Joshua and therefore carries the same meaning) would cross over the Jordan from east to west, to bring about Father God’s generous provision of salvation.

And so it was that, like Moses, Jesus was about to leave them. Not surprisingly then that, with the first question asked, Jesus points the crowd to Moses’ last will and testament given to them on the east bank of the Jordan.[c] 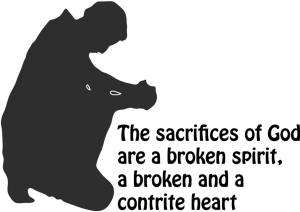 While the topic, this time, was about marriage rules [v2-12], Jesus had less than two weeks left to live, and I detect a note of Moses’ sadness in His answer: “It was because your hearts were hard that Moses wrote you this Law…” So, in talking about the most ancient of all relationships, outside of our relationship with our Maker: marriage (and how this had become distorted from what it was originally meant to be), Jesus’ response looks incredibly strict. [v11-12]

If Jesus is correct in His understanding of what Father God expects of humanity, pretty much all of us are in trouble! When I was at school, our single-parent home life made us the odd one’s out. Today, many families (particularly in the West) have experienced one or more divorces. This doesn’t even begin to address the idea of same-sex “marriages”.

But Jesus knew that the issue wasn’t the rule. The problem is that we haven’t got our head around the idea that we were created (both male and female) to be like God.[d] If we fully understood what we were created to be, we’d have a chance at understanding that, together – in the right relationship, complementing each other in our differences – we, as a male/female unit, are designed to emulate both sides of Creator God, functioning as a full representation of our Maker to the world around us. Our role, as both male and female image-bearers, was to get ourselves to a point where we knew each other so well (and our working relationship was so streamlined), that we moved as a unit into our fullness: to co-rule over our immediate environment with male leadership and female leadership jointly ruling in cohesion over this planet in a “God-like” way.

All the palaver with “divorce rules” (initiated in the Law of Moses), came about because of our hard hearts. If our heart fails us in getting this most basic relationship right – as our Maker had originally planned it [v5] – how will we begin to understand what it means to move onto Step Two: becoming a member of His “Royal Priesthood” in a “Holy Nation”, proclaim the excellencies of Him who has called us out of darkness into His marvelous light.[e] 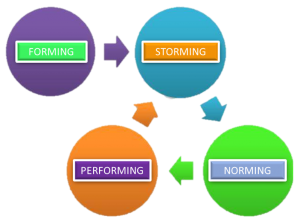 Perhaps you’ve heard of Tuckman’s four stages in group dynamics: forming, storming, norming and performing.[f] Well, after coming together, many couples can’t get past the storming stage so they opt for a divorce. If we could work through the storming stage (which usually includes marriage counselling), we’d be able to lay down some “norms” to make the relationships in the group – including the dynamics with juggling the children – function appropriately for a sustained future.

If we then get through the “norming stage” – developing a culture that’s normal i.e. what will normally keep everyone happy, strengthen ties, and make things run smoothly – the marriage will then start to fly. It’ll function well at the “performing stage”. That’s the point at which you get to achieve the fullness of why you came together in the first place.

But here’s the thing… the target ISN’T fulfilling your own dreams. Nor is it to make it to your 50th Wedding Anniversary and have a party with your friends!! The target is to be a full representation of the Creator God to your immediate environment. When God created images of Himself, He split the atom. All the work now, and all the effort, is about someone (the part to the God-atom that is opposite to you), being able to help you appropriately emulate the full Image of God. Together with “your other half”, you can “perform” to the highest standard, ruling over your immediate environment as your Maker’s two-part image of Himself.

Children have a valid and equal place among adults when it comes to access to their Creator. [v13-16] In fact, the Kingdom of God actual belongs to them! We can certainly learn a thing or two from how quickly and simply they believe in the existence of a great and good Father God. 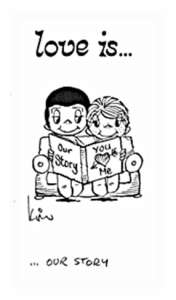 In a recent conversation with our daughter, she asked Mark why we call each other “mummy” and “daddy”, even between ourselves. It’s become such a habit that it now feels more like our names than actual titles. And so our relationship has moved on from those early days of our story, in more ways than one. After three+ decades of marriage, we hopefully understand what pleases each other, what’s hurtful and, at the very least, what to call each other! This, at times, can be more than what’s said of my relationship with my Father God. So, if I’m to understand my relationship with my Maker, I need to understand five important things:

Sandwiched in all this – and this really is the important bit in the middle – is the ever-present unavoidable event that changes everything. [v32-34] So if I’m to ask: What’s in a relationship? It’s these two small verses set at the centre of this chapter. It’s the crux of the story in the ultimate relationship known to man – the relationship between human image-bearers and their Maker.

Inevitably, there’ll always be two responses to Him – those who are astonished, and those who remain afraid.  Irrespective of our failings, though, it’s what Father God did.  In love, and for His part of the relationship between Himself and those He made to be like Him, He set about that week providing limitless salvation, not just to one people group or nation, but to the whole world. What’s amazing is that it’s way more than any “sacrifices” I could ever make, to make the relationship work. The Creator holds me in His arms and, now that He’s near, everything is different. I know I’m not the same. My life was changed when He changed world history forever….