If we’re paid to know, we should know and, we need to know. If we’ve been trained to know, and don’t tell 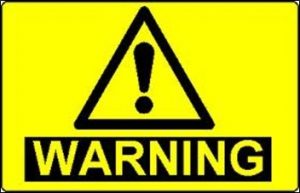 others what we know, we’re likely to be fired for incompetency i.e. we’re not doing what we’re paid to do. If we’re ignorant, we’re not responsible. But if we’re told and we either refuse to listen, or else haven’t taken it seriously, we are very much responsible. If death or injury occur as a result of our silence or inaction, we’re responsible.[a]

Once again today’s chapter is in three parts and, once again, it can feel disconnected after the first read. As always though, nothing related to the Creator God or His epic storyline, is random. Everything intersects to unveil an extremely complex 3D puzzle. Today’s intersecting puzzle pieces address the elephant in the room – the topic that makes Followers of The Way feel like they’re trusting in a first century sci-fi!

The elephant in the room, that everyone seems to want to ignore these days, is actually “a black swan” – an unexpected event that’ll strike suddenly to bring down the entire house of cards and, the cataclysmic results leave the familiar unrecognisable.

In my role in management accounting, I knew how important it was to convert financial data (accurately and timely), into usable information so that

appropriate management decisions could be made. Companies across the globe employ clever people who continually scour filtered company records against the environment, in order to identify and head off “black swans”. The statement: “O dear, I didn’t see that coming”, isn’t at all acceptable for anyone who expects to keep his/her job. There’s too much at stack. The future of the company depends on interpreting appropriate levels of the right information, then predicting the unexpected.

Just as any company focuses on getting their internal systems working well, so that they’ll be prepared for the unexpected, Jesus warns His Followers to “get their house in order” in preparation for what’s ahead:

This is the grease in the machinery that keeps one’s “spiritual life” from clogging up – the standard system processes that ticks away through the highs and lows of normality. Then, in today’s chapter, Luke throws another “moment” into the narrative that can seem a bit disconnected.

The Healing of the Ten Lepers could be glossed over as a nice event in a chronological storyline – a disruption in Jesus sermon, so to speak. [v11-19] And yet, I don’t believe so. I’ve enough experience to know that the Creator God is incredibly complex. These ten lepers showed up with precision timing, to thread together incredibly important teaching. This interjected story tells me that the only way to keep the “machine of ME” ticking away smoothly (according to the 3 points above, and the “black swan” ahead), is to stop regularly, take stock and evaluate, acknowledge God at work then give thanks. 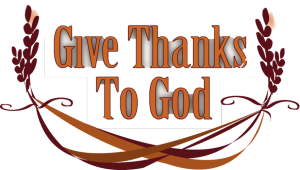 Gratitude not expressed is not gratitude at all. How many of us feel unappreciated? How many marriages fall apart because one or both sides aren’t grateful or expressing their appreciation for the other person’s work and effort? A little thanks along the way, goes a long way.

When I first wrote this post, it was Good Friday – the day that Jesus sacrificed His life to take away the sin of the world. It reminded me of a moment I had in Jerusalem in 2012. I wrote the full story in my April 2nd Breadcrumb and you can read it there. In short, I was in Jerusalem walking through the Muslim Quarter, when I had an unexpected and extraordinary moment on the steps that lead up to the Damascus Gate. In a sort of out-of-body experience, I seemed to be caught up in time and space for a fraction of a moment, to be part of the crucifixion story.

In an instant, the experience made me suddenly aware of two things: that I may be standing on the exact spot where Jesus stumbled under the 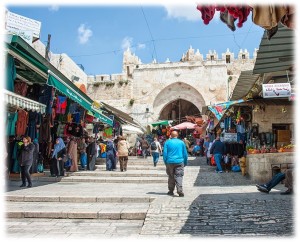 weight of His cross[b]; and that I should give thanks on my knees right then and there. But because I was a woman and right in the middle of the Muslim quarter, I had visions of a riot breaking out – just as it did for Jesus. I move on and was never able to return to that moment again.  Now I’m sorry that I couldn’t “embarrass myself” even for a moment for Him, after everything He poured out on those steps for me.

So I’m convinced that it’s absolutely crucial for me to keep returning back my Maker – to give Him thanks and praise. Out of ten people in today’s chapter, only one bothered to stop, acknowledge divine intervention, “count his blessings” and returned to give thanks. [v17-18]  By not returning to the Master Planner behind the plot, I’ll have no idea what to expect from one scene in the drama to the next. So the first two parts to this chapter are about having a good working relationship with others and with Father God that’s functioning at an appropriate level. With this in place, the Author turns our attention to the unexpected… 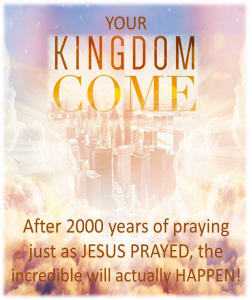 For more than 28 centuries now, the Creator’s Family have been waiting in earnest expectation for The Day of the Lord.[c]  An act of Divine intervention in history where His Kingdom will come. Jesus even got His followers to pray “Your Kingdom come. Your will be done on earth as it is in Heaven.”[d]  A prayer that’s been continually prayed somewhere on the globe every week for the past 2,000 years. So the question over “When?” [v20], isn’t a new one. The “company directors” wanted to be the first to know and, if Jesus was indeed a prophet, He’d be able to predict when.

In true prophetic style, however, Jesus’ answer encompasses the immediate, the mid-term and the long-range qualities…

When I first wrote this post, it was the Jewish Passover – or, Good Friday just before Easter. It’s a night that marks the moment when the Creator God passed over the land of Ancient Egypt. By morning, He’d separated out for Himself more than two million people to be a people belonging to God. He extracted out one whole nation, taken clean out of another.[e]  And, today’s chapter in the Book of Luke, shows that the Creator God is planning to pass over this globe once more…

So then, this isn’t an unexpected “Black Swan” in the true sense of the term. It’s something that is expected, immanent i.e. it could happen in any generation since the warning was first given. The warning signs, the specific preparations, and the quantified outcomes are clearly documented. The point that Father God has always, and only ever made, is: who’s interested in listening: “Who has believed our message and to whom has the arm of the Lord been revealed?”[f]