Onlookers, without taking time to dig for hidden riches stored in secret places[a], 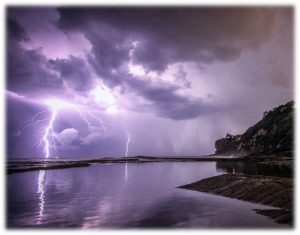 could feel right in their assumption that the Creator God appears no different to any of the volatile evil spirits who have held “the uneducated” to ransom with fear, by plaguing tribal groups for millenniums. Surely, it’s a chapter like today’s chapter, that proves how gods from ancient times have no place in today’s advanced society!

But if you care to follow my Breadcrumbs from the beginning, and walk with me this year through everything I’m unearthing for you, I’m hoping that we can reason together over the topic of the existence and involvement of the Creator God in turbulent times. 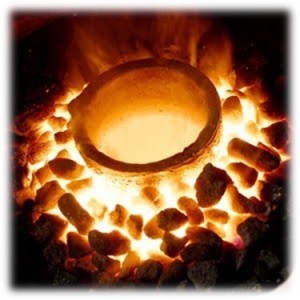 This was the thought behind my second book Mysterious? …Expect the unExpected… where I’ve isolated some of the “volcanic eruptions” in my own journey, at times, through dire straits. As an intelligent human being, with time on my hands to reason, I’ve discovered proof of hidden treasures stored, in advance by my Maker, in secret places – in hidden recesses of human experience – yet readily available to find, if only I’d take the time to look.[b]

And so, the first thing I’ve notice from today’s chapter is that this “battle of wills” between the God of the Universe and the King of the World, isn’t about fame, money, or power. This isn’t a neurotic “evil spirit” wanting to be in control by bringing a nation to its knees through fear. HIStory from beginning to end – this epic Play that begins with making humanity in His Own Image to be like Him[c], and which ends with God’s dwelling place among the people for He will dwell with them[d] – has only ever been about releasing His family members. [v1]

Two things are noteworthy in the very first sentence of this chapter, before we go any further. First, if this were my firstborn son, whom I love beyond measure, I’d certainly go to the ends of the earth to rescue him from entrapment. Even if I hadn’t a specific plan thereafter, I’d want him out of the snare and back with us under our roof. We could then at least rebuild his confidence, get him on track (including re-educating him), then relaunch him in a completely different place so that his past becomes “just a bad dream”. I’d fight tooth and nail to achieve this if I had to.

The second hugely important note here, is that Israel is the Creator’s firstborn son. This is an incredibly important gemstone woven into the fabric of the storyline, and it needs to be pocketed away for your understanding later. The fact that the Creator specifically used the term “firstborn”, then left it in HIStory (miraculously preserving it for close on four millenniums for us to read today) tell me that there’s more sons. The Creator God’s family is bigger, there’s a bigger picture to this “family tree” but, it begins with Israel – the firstborn.

So, whatever background we come from now – whether Muslim, Christian, Hindu, Buddhist, or any other background who think we may have Truth from the horse’s mouth – we all have to get over ourselves and admit that the Creator’s story first started with the Jews.

They were the ones who wrote it down; instituted an incredibly complex process for copying it painstakingly – to ensure that no errors crept in; then risked life and limp to preserve it – the greatest example of this is the Dead Sea Scrolls found in the 1950s.[e] If we want any connection at all with the Creator God today, there’s no way around it, the Jews are our older brother in a family line that leads back to our Maker. Their script is our inheritance from our Maker – our Maker’s Handbook – handed down to us through them.

In other words, without the Jews, and their experience of the Creator God from the very beginning, it’s extremely likely that none of us today would have a relationship with the Creator God – where we know as much about His thinking and His behaviour; what He expects of us as individuals; how we – as both male and female image-bearers – can be acceptable through living our lives in His likeness, as we were designed to do; and how we can be forgiven of our inadequate reflection of His image – as we now can be, and as many across the globe so freely are.

So, sandwiched in this epic storyline – these pages of the Creator God’s personal diary, HIStory about His relationship with this world that He created – is where we find today’s chapter. 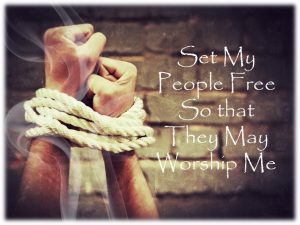 This scene is about a people group who could worship the Creator, but who can’t in their present state. For whatever reason – whether their lives would be in danger if they openly worshipped the Creator as they should[f], or that their workload (their present “slavery” in their life experience) is such “dire straits” that it’s destroying their faith in their Maker – it’s now time for drastic measures! In His loving-kindness, the Creator will lead His people firmly by the hand into a radical life-change.[g]

Whatever transpires between the Creator God and the greatest civilization on earth, after the first verse in today’s chapter today, is needless. His ask is a simple ask: “Release my son so that he can come and worship me”. The refusal to allow religious freedom and release from earthly restrictions; the refusal to stop persistent oppression (keeping human image-bearers from a full and complete relationship with their Maker); the victim and abuser crisis that is still prevalent today; this is the cause for such powerful divine intervention in the rest of today’s chapter – the likes of which had never been experienced before. [v18,24]

“…if you refuse, I will send the full force of my plagues against you and against your officials and your people, so you may know that there is no one like me in all the earth…” [v14]

If we refuse the Creator God and don’t come to Him, or if we dissuade others from going out of their way to find and worship Him, at some point He will intervene. If anything, HIStory has proven this to be true. Unfortunately for us, His documented interventions are 100% powerful, simply because that’s who He is –  the Lord God Almighty. 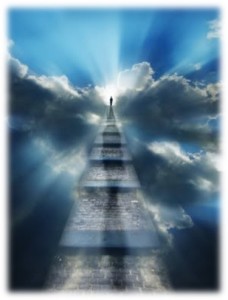 The Creator is never distant or uninvolved in the world that He created. And yet, because we were originally designed as rulers, He leaves a lot to our free will. With that said, HIStory has seen Him being forced to get directly involved[h] and His divine interventions in human history are like a 100% good judge: who’ll bring down the full force of the law upon the head of any perpetrator, who has had ample warning to change! The Creator can’t be anything other than every bit of Himself – first as a compassionate and gracious God, slow to anger, and abounding in truth and loving-kindness[i], then with righteous judgements that are just and true.[j]

The three plagues in today’s chapter, for example, shows an incredibly gracious God who listens to Moses’ intercession on behalf of the most ruthless oppressors of the ancient world.[k] Yet each time things went well again, Pharaoh disregarded the Lordship of his Creator. [v7,12,33-35]

The text says that God Himself hardened Pharaoh’s heart. But what that simply means is that He lifted His own power for good from Pharaoh’s heart – given him free choice without the aid of His Holy Spirit to help him choose what’s right and good. The result (left to his own conscience and reasoning), is that Pharaoh’s free-will rejected God – even after first-hand experience of the supernatural.

The text doesn’t tell us what’s in Pharaoh’s mind, nor what his advisers were advising him. But if he’s anything like humans today, he’d have reasoned the supernatural out of the equation. Knowing human nature, he’d have put it down to weather patterns, and a temporary natural disaster that came and went. In this, human reasoning hasn’t changed. No matter how evolved we think we are, we only turn to God – acknowledging that He’s right and we’re wrong, admitting that we’ve “sinned” – when we’re in dire straits. [v27-28] As soon as there’s a logical explanation, or the sun shines over our lives once again, we ditch God and go on as before.

So, what have I learnt from today’s chapter?

From ancient times, the Creator God has only ever wanted a people for Himself – like a father leading his children to the place that he has prepared in advance for them to go. Plan A is to collect a family of image-bearers (who are willing to live with Him, and like Him) in a natural and quiet way. If not, then His great love for those He created, will cause Him to intervene with a supernatural extraction when forced.[l] The question in the meantime is, am I going to be like Pharaoh (hardening my heart against the Living God today) or will I wait until I’m in dire straits before I’m more like Moses, who surrendered …whatever the cost…

[g] Romans 2:4b (The Message Paraphrase)