With four days left in the year, organisations, companies, teams and individuals will be looking forward. 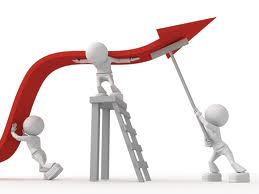 A good planning strategy will include taking a fresh look at the overall strategic plan before dropping down through the tactical level to the operational plans that are needed for the coming days and months. Even if you’re not operating at a strategic level in your company, your bosses and company directors will have a mission statement and strategic plan. This should be your inspiration for your daily operational work tasks.

On a very simple and personal level you may have a lifetime strategy to grow old gracefully. So, on a tactical level you may have gym membership or you’re planning on joining a gym in the New Year. On a day-to-day level, you’ll be operating on certain disciplines that meet your long-term goal such as drinking plenty of water, checking your diet and exercising regularly. Strategic Plans, even the unspoken ones, inspire us to reach out for something more. 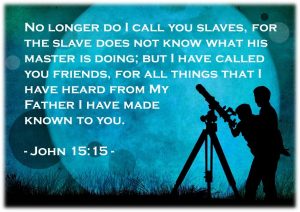 In John’s Book of Revelation, we see that the Creator God has disclosed His Strategic Plan to those whom He created in His own image. And, though we’re not sure how long it’ll take to see His tactical moves or specific intervention in operation in everyday life, in today’s chapter we can see broad brush strokes to a global picture of the events, that will lead HIStory to its conclusion.

Firstly, there’s a great multitude in heaven and these people are happy. [v1,6] They’re saved from something in their past, about which they shout out “Hallelujah!” – which means “He Saves!” Salvation, Glory and Power belong to the Creator God because His judgements are finally seen to be right and true. [v1-2]

Unlike any other god who is worshipped in hopes of receiving something in our future i.e. good fortune or future protection from evil spirits or bad karma (which, in effect, is only about the individual), Father God is praised for what He’s done in the past, which is in and for the whole world. The Creator God has put a permanent stop to the root-cause of corruption and, with this global solution, He’s avenged the wrongful deaths of the innocent. [v3-4]

When you see the word “Amen” coming from those closest to the throne of the Creator God [v4], it means that He “confirmed, supported, or upheld” what was said. It’s a verb associated with the Hebrew word for truth (’emet ), which carries the idea of certainty or dependability. In other words, the Creator is staking His Word on this event in John’s Vision. As graphic, symbolic and as hard as it is for us to imagine, it an absolute certainty that the Creator was, is and will be praised as the Lord God Almighty. [v6] When we get there and join the multitude, we’ll see it with our own eyes.

The great joy going on is because the marriage of the Lamb has come, and “The Bride” has made herself ready. [v7] But what’s this mean?

To understand this, I suggest going back to Jesus’ parables – stories that He told – especially the Parable of the Wedding.[b]  But from the earliest times, it’s clear that Father God wants a family. He created us in His own image to live in His likeness, and the pictures He’s used throughout HIStory show His desires. 800 years before John saw his vision, the ancient prophet, Isaiah, had already predicted a future for God’s people…

“Fear not, for you will not be put to shame; And do not feel humiliated, for you will not be disgraced; But you will forget the shame of your youth, And the reproach of your widowhood you will remember no more. For your husband is your Maker, His name is the Lord of hosts; And your Redeemer is the Holy One of Israel. He is called the God of all the earth. For the Lord has called you, Like a wife forsaken and grieved in spirit, Even like a wife of one’s youth when she is rejected,” says your God. “For a brief moment I forsook you, But with great compassion I will gather you. In an outburst of anger I hid My face from you for a moment, But with everlasting lovingkindness I will have compassion on you,” says the Lord your Redeemer. [Isaiah 54:4-8]

So the pictures in today’s chapter aren’t at all new. What’s new today is my response to the news.  I need to get ready. [v7]  I need to ensure that I have some “righteous acts” in my experience – so that I too will be given clothes of fine linen. [v8] This also is not new information. To understand the exchange of clothing that will take place when we enter into the Kingdom of our Maker, you may want to read what happened to Joshua, the High Priest, in the days of the prophet Zechariah.[c]

If Joshua the High Priest (who had ritually purified clothes on) was seen, from God’s perspective, as dressed in filthy rags. Then how much more will my “righteousness” be caked in corruption![d]  Yet just as Joshua, the High Priest, was granted free access, 600 years earlier, among these who were standing in the presence of God, that same Angel declared to John: “Blessed are those who are invited to the marriage supper of the Lamb!” He then made those words ironclad by saying: “These are true words of God.” [v9]

Now, before going any further, you’ll need to check if these things are fraudulent or fairy tale. One way is to see the behaviour of the messenger. Upon seeing and hearing all this, John fell down and worshipped the messenger. This isn’t at all unusual given what this divine apparition looks like.[e] It’s also not unusual for humans to kneel, fall down, or cover their faces before supernatural beings. 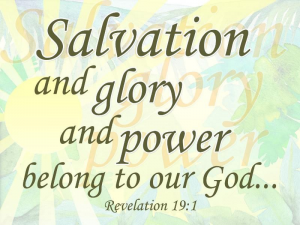 What’s not natural, is for a fraudulent person (whether an angel or whether it’s Jesus) to give glory to God. [v10] If there is any question over Jesus’ role, and whether He has usurped His position under God, John’s vision makes it clear who’s at the top – above all others. Although all authority had been given to Him[f], Jesus continues to point people to our ultimate authority, Father God, and not to Himself.

In so doing, however, Jesus tells us something about our own status in heaven. While on earth, we prayed to Jesus (our Great High Priest who intercedes before the Father for us[g]), and “bowed the knee” to His authority[h], it’ll be different in heaven. In heaven, He has lifted us up to be like Him – on a par with Him – as “fellow-servants” of our Maker. [v10]

What John saw next is what’s called “The Second Coming” – a hope that’s held by Jews, Muslims, and Christians. But since the days of Zechariah the prophet[i], no-one has given such detail as that given by John. Jews are expecting their Messiah to come in divine glory to sort out their nation and this world. Muslims are expecting their prophet Mohamed to come leading the way, with Jesus at his side, to bring divine change.

But John describes things in v15-16 that hark back to some for the oldest of things ever written. Moses, for example, spoke about someone at the birth of the Nation of Israel who has been given the authority to judge – to forgive our rebellion (or not) and this is specifically because He carries within Himself, God’s Name![j]

Isaiah the prophet also foretold a day when this person will “strike the nations with the rod of His mouth”.[k]  The fact that John said He’s “clothed with a robe dipped in blood” [v13] identifies who He is. He is someone who has received a robe (clothed with a garment or shrouded by a task) that required a significant amount of blood.

Armageddon is another name for what Father God has been predicting for this world since ancient times.[l] But John’s vision shows why He’ll be forced to perform one more global intervention. The plan is to put a stop the root cause of corruption and bring about a permanent end to evil and rebellion against God and goodness. [v17-21] So, in graphic terms, John sees something in world history that has never been seen before and won’t be seen again. 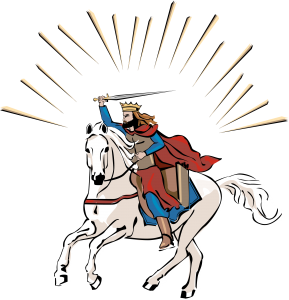 The Creator’s Judgements may seem harsh to someone sitting in middle-case England, who has never experienced real abuse and injustice. For the world’s victims today, this chapter is Good News! Satan and his cohorts, along with anyone who refuses to change their ways, there is a permanent end. When it finally happens, and Father God sends His riders of Knights in Shining Army, no-one will be in doubt that this is the only solution left for the Creator of a race who have been proven time and again through the centuries, that they are unable or unwilling to be any different.