Our late son, Michael, knew this “true love” side of his Servant King. The last song highlighted on Mike’s iPod that he listened to, and the last song that his Dad heard Mike playing on his guitar, less than twelve hours before he passed away, was Servant King by Hillsong Australia.

We all have images of what a successful leader could be. They’re likely to have a big office, status, nice clothes and the popularity that facilitates their position of commanding authority to get things done. If the followers are poor – the leader’s clothes, lifestyle and salary is the inspiration to follow where they’re going. If the follower struggles to get anyone to listen to them – the leader’s personality and popularity, that facilitates their authority, becomes the inspiration.

While there are many good leaders out there who “shepherd the flock” well with care and concern, as they assist their Maker in leading them in the right direction, there continues to be fake shepherds – people who say they represent the Creator God but clearly don’t follow His example. Very few leaders would be willing to die for their team. So, today’s chapter begins with an interesting observation from John: that Jesus had been a loving leader and then he outdid Himself. Though He knew His end was in sight, He continued to show His love to them to the end. [v1] It’s this love that both the Father and the Son has shown to us, that causes millions of us to sing today…

Since it’s easier to push a weight forward from behind, than to pull it from in front. So, some define good leadership as someone who has the title and the office but they don’t seem to use them. They shepherd the flock from behind, keeping everyone together and pushing the team forward… “a servant king”. Jesus demonstrated this by washing the feet of Judas and Peter (one who would betray Him and the other disown Him), along with the others present. [v5-11] The key to Jesus behaviour is in the fact that He was confident on His control over what was about to happen to Him over the next 20hrs and that He was about to face God. [v3] I wonder how many of us would change our behaviour towards others if we knew we were about to meet our Maker.

But just accepting someone’s gracious temperament can lead to abusing their goodwill. So, assuming on the grace and love our Maker alone, can lead to treating Him like our servant. Like a sort of Gennie in a bottle, we ask Him for loads of things; expecting forgiveness for our “sin”, but not understand who He really is. The fact that He has a supernatural ability to love in the face of betrayal – and it’s been going on for centuries[a] – doesn’t detract from our need to be spiritually washed and then topped up as we walk into more dirt just living life on this planet. [v10]

The “bath” that Jesus was talking about [v10], is baptism for the washing away of sin, after someone has repented (made a 180◦ U-turn in the heart towards their Maker) 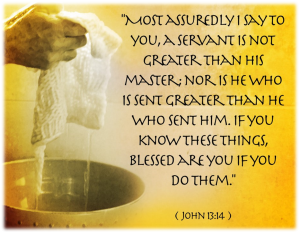 and committed to following their His word. Having one’s feet wash is figurative for continually asking Father God to be cleaned because we’ve walked in the ways of this world, our own ways, or the ways of sin. Each week, many believers today will attend worship meeting in order to have the events of last week washed away and a clean slate.

We do this because we’re to metaphorically have our feet shod with “the preparation of the gospel of peace”.[b] In addition, the ancient prophets said: “How lovely on the mountains are the feet of him who brings good news…”[c] While it’s true that Jesus fulfilled this, we’re to be like Him. Where we walk, what we willingly walk into, how we walk through this life will often require cleaning which is done through repentance and turning around to go in the opposite direction.  So, when Jesus told Peter that unless he’s washed, he has no part in Himself, it was a warning to us all. [v8]

All of us are responsible to walk in the right way. But since HIStory has shown that this is a proven impossibility, we’re to get washed clean by Jesus – the only one to have the role of “taking away the sin of the world”.[d] But all of this sounds fantastical and how are we to believe it?

Like a complex Shakespearean Play, and not at all surprising for a complex multifaceted Creator God, there’s intricate clues behind the clues yet again. To understand what Jesus is trying to explain in His last speech on earth, I suggest that you read Exodus 3:13-15 and then John 13:12-20. Everywhere that Jesus said, “I am”, He was connecting what was happening to the men in the room, and connecting Himself, to their ancient past – especially v19. In less that 24hrs, the use of the words “I am” or “I am who I am”, will see Him condemned to death.[e] So much so that, if we want to receptive to our Maker into our hearts and homes and lifestyles, we need to be receptive to Jesus. [v20]

According to Jesus’ prediction, the number of “wolves in sheep’s clothing” will increase in the last days.[f] And, if we think that the Creator God is detached from our hurtful experiences here, Jesus saw trouble first hand [v21] and is betrayed to death by one of His closest friends. [v21-30] I wrote about Judas’ behaviour in yesterday’s Breadcrumb, suffice to say here that the level of detail in the storyline is unbelievable for a private event two millenniums ago!![v23-24] If this was a lie put about by grieving friends after Jesus died, there would be so much additional detail. This only points to an accurate record of exactly what John remembered from that night. 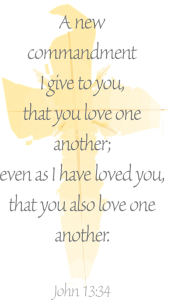 The chapter ends with another puzzle piece from the ancient past. Jesus uses the term the “Son of Man” for Himself in direct connection with the prophet Daniel’s vision.[g] And when He speaks about being lifted up, He’s talking about two things – being lifted up from the earth on the cross and being lifted up by the Creator God to be raised again and then “ascended” into heaven.[h] But as amazing as this is, Jesus thoughts, at the end of the day, are on equipping those He friends for life without Him. And to do it, He chose to start with love. [v34-35]