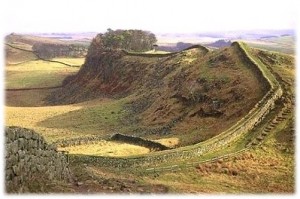 Outside of Rome and Israel, I wonder if the borderlands between Scotland and England is perhaps the closest I’ll ever get to the days of Jesus. This is home to the famous Hadrian’s Wall – built by the Roman Emperor Hadrian who lived between AD76 and AD138. Not far from where we live, is the largest Roman Fort on Hadrian’s Wall. It has an oven built into the south gate and when they excavated it, they found a purse behind the oven with coins in it from Jesus’ time.

Several years ago, our children’s school needed an extension. But a team of archaeologists had to be brought in to excavate the playground before the building works could be done. Just under the surface where our children played each day oblivious to history, they found Roman drains and the remains of a Roman road from the fort that was there in AD130.

But our local museums really give us the full extent of how disciplined the soldiers were expected to be, and how ruthless the punishments for non-compliance. Broken bone and sharp metal pieces were woven into leather strips to make their whips used for beating “criminals”. As I stood looking at the artefacts, I shook my head in disbelief at what Jesus survived, just in the flogging He endured! He then had a double dose of punishment, and went on to be crucified! For the first time in my life, I saw the facts right under my nose, which backed up what I already believed in faith.

But the first thing that you may notice with this chapter, is that it’s different to Mark’s account. So is this story right of is Mark’s right?

If a crime had been committed, any lawyer would be looking for authenticity in difference. Four identical stories points to coercion. Seen from four separate angles, people will always see things differently and remember things differently. But it seems that John was the only one who had a first-hand account of a missing body at the tomb that morning. He and Peter went there after the women came to share the great news.[a]

Matthew, Mark and Luke weren’t on the scene. So their accounts are taken from interviewing people involved, and they recorded various parts of the stories they heard. It took me three years to write, correct and cut-back my book which was only 12 chapters. So the puzzle pieces came together in Matthew’s book from everyone’s story. And some things weren’t included as they were in other books – again, quite normal for writing books about the same event.

It could well be that, in time and when the heat was off, one of the Roman soldiers admitted to the truth of their side of the story. [v4] After all, a Roman soldier who “showed fear” would be worthy of a severe flogging. V11 says “some of the guard” which means that Pilate had posted a platoon of soldiers to ensure that the body wouldn’t go missing. If they deserted their post, they’d be flogged. So I notice that they went to the chief priests, and not their superior officers. It’s clear that something happened – something supernatural that required religious leaders to explain, and to help them get out of trouble for losing the body. [v12]

Paying the soldiers off with a large sum of money in itself would have carried a flogging as penalty. So a story was hatched that the disciples came in the night and stole the body. [v13] But how could unarmed fishermen get passed highly trained Roman soldiers and why would highly trained soldiers be asleep on the job?  Either way, the soldiers would be flogged if Pilate’s orders were breached in any way. He just flogged Jesus for nothing. How much more would they be flogged without mercy for losing the body! So the religious leaders agreed to smooth the way with Pilate. [v14]

I just saw a movie called “Risen” with Joseph Fiennes and Tom Felton, released in 2016, and I highly recommend it.[b] It was about the trouble that Pilate faced in the weeks after Jesus went missing, and how he privately commissioned a commanding officer with the job of finding the body. It’s Hollywood, of course, but based on what we now know of Roman soldiers and the trouble Rome had in keeping order, it’s very good to see another side to the world greatest mystery.

Matthew’s account includes an earthquake and he seemed to blame it on the angel descending from heaven. It was the angel who rolled away the stone. [v3] The fact that an earthquake had already struck on the Friday – when Jesus died[c] – makes sense if this was an aftershock. 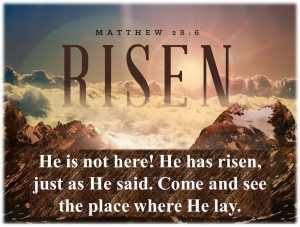 The divine messenger tells the women “Do not be afraid…He’s not here, for He has risen, just as He said.” [v5-6] What a shocking moment for the women to look inside to tomb and find no body! Still confused and reeling with disbelief, John remembers Mary saying, “They have taken the Lord out of the tomb, and we don’t know where they have put him!”[d]

Then the astonishing happened. Jesus appeared to the women and told them that He’d meet His followers in Galilee. [v8-10] Matthew seems to skip the following weeks where Jesus appeared to more than 500 in all, before He ascended into heaven – to fulfil what the prophet Daniel saw in his vision, 600 years earlier…

“In my vision at night I looked, and there before me was one like a son of man, coming with the clouds of heaven. He approached the Ancient of Days and was led into His presence. He was given authority, glory and sovereign power; all nations and peoples of every language worshipped him…”[e] 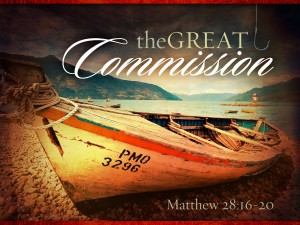 Matthew, a Jew who was writing to Jews, was concerned to end his book with “what’s next”. What’s the responsibility, now that you know what I know? When Jesus said, “All authority has been given to Me…” it was right in line with what Daniel saw in his vision. So Matthew includes what’s now known as The Great Commission.

Followers of Jesus don’t proselytise – which has an emphasis on converts to a religion. Even as far back at Isaiah’s time, Father God was asking: “Who has believed our message and to whom has the arm of the Lord been revealed?”[f]  He was asking this because few were listening. Nothing’s change today, and the question is still out there, unanswered. So Followers of Jesus – who live in a world with the same trend permeating every society – are meant to spend their lives sharing great news about a divine relationship …whether people listen or not.