Today’s chapter shows an example of the supernatural gifting: “Words of Knowledge” – what is it, where it comes from, and how it works…

READ 2 Kings 7  Make notes, if you’d like, of what stands out for you. Feel free to use the “Leave a Comment” box below to also write some of your thoughts.

A THOUGHT FOR TODAY:

In the days leading up our shipwreck off the southern tip of South America, several people became aware of something significant looming ahead. I wrote about the night we lost the M.V. Logos, in my second book Mysterious? …Expect the Unexpected.

One girl, for example, had a vivid dream in which she saw our ship’s crew and staff dressed in pyjamas while men in military clothes stood around us. Thinking that the dream was illogical, she pushed it to the back of her mind. One of the deck guys had a very strong urgency stir within him. It was compelling him to tell our captain to “be extra vigilant” on the next sea voyage. Our captain was a very strong British sea captain, with years of experience. So, feeling rather intimidated and stupid at the thought, the message wasn’t delivered. 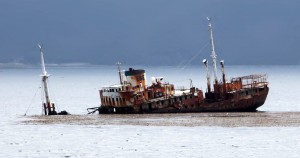 Rescued from the World’s End

On the night we set sail from the southern-most city in the world – Ushuaia, Argentina – I’d been working late in the finance office. Before leaving my office, however, I had a strong feeling that I needed to pack down the finance ready for a “grab and run” scenario. Then when I turned in for the night, I folded my clothes into a pile on the stool in our cabin, in the order of putting them back on again – in the event of an emergency evacuation without lights.

It wasn’t until we’d regrouped two days later in a hall in Punta Arenas, Chile – after being rescued by the Chilean Navy and airlifted 500 miles north of the accident scene – that one-by-one people came forward with personal stories of what they’d previously written off as nonsensical information, that they’d “received” but hadn’t taken any further. As the puzzle pieces came together, we began to see that this event in our lives wasn’t a random accident. The Creator God knew that it was about to happen, and He was feeding His image-bearers information (Words of Knowledge), in preparation for what was it come – irrespective of the fact that none of us took the information seriously enough to act upon it.

In today’s chapter, the ancient prophet Elisha demonstrates that Father God has a plan. With a bird’s eye view from where He sits, our omniscient (all-knowing) Creator knows what’s around the corner. Elisha’s job was simple. He needed to have an intimate relationship with the One who made him, then train himself to listen and obey. But being supernaturally gifted with Words of Knowledge also meant that Elisha would ensure he was listening to the right voice! Was it likely to come from the direction of the One whom Elisha had carefully studied i.e. was it out of character or in line with the overall storyline so far? After carefully weighing up the information that he’d been given, He then had to do something with it. Often, the “obedience part” is a very self-conscious and uncomfortable experience! Read More? …CLICK on “21 June – Additional Notes”

But what about your thoughts – can you tell me what today’s “breadcrumb” is? Leave a note in the “Comments” box below to tell me what you think of today’s chapter.

Wanting to speak with the One who knows it all? The rest of this webpage uses Jesus’ own prayer to help…[a]

1.   Praise: “Our Father in heaven, hallowed be Your Name. Your Kingdom come! Your will be done on earth as it is in heaven …”

Lord, the God of heaven, You’re the great and awesome God because You keep Your covenant of love with those who love You and keep Your commandments! [Nehemiah 1:5]

4.   Protect: “…Lead us not into temptation but delivers us from evil.”

You’ll cover me with Your feathers, Lord, and under Your wings I’ll find refuge. Your faithfulness will be my shield and rampart. [Psalm 91:4]

“For Yours Lord is the Kingdom, the Power and the Glory now and forever. Amen!”

When questioned, tested, tricked or in His hour of great need, Jesus spoke what was previously written in God’s Word.[c] So, the final section on this page is about memorizing the script through 10 topics. Following these will help you learn 52 portions from the bible in a year!  THIS WEEK’S MEMORY VERSE: Using our Gifting

“God also testified to this salvation by signs, wonders and various miracles, and by gifts of the Holy Spirit distributed according to His will.” [Hebrews 2:4]

kathyPosted on June 21, 2016 No Comments Posted in Daily Breadcrumbs