In the early hours of January 5th 1988 the MV Logos ran aground off the southern tip of South America. By 4am it was clear that we had to abandon ship and leave behind everything except the clothes we stood up in. I wrote about that night in Chapter 5: “At the World’s End” in my second book Mysterious? …Expect the Unexpected More than 25 years on, this is what the ship looks like today… 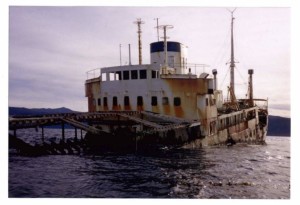 We had heard that the funnel had been painted in recent years in order for the wreck to remain clearly seen as a warning for passing ships. The steel girders are what’s left of the bookshop roof that had once hosted thousands of visitors. 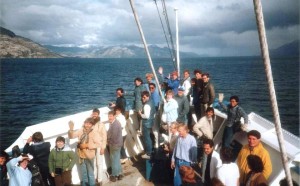 Sailing the Magellan Straights on the last voyage before that ill-fated morning. 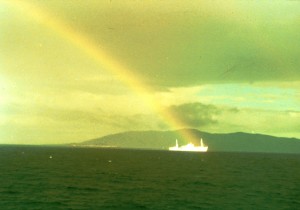 The rainbow promise: those of us who left behind all our plans and dreams that day along with our possessions, looked back at our stricken ship. Though it was left abandoned to fill with water, we were amazed to see the Creator God’s personal message to us in this uncannily applicable snapshot. 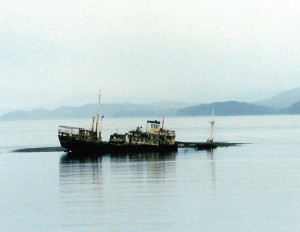 At the World’s End 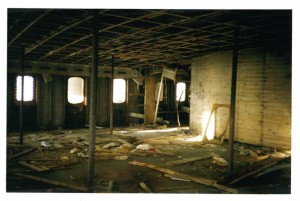 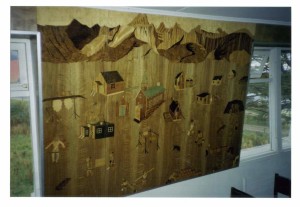 The Danish built Logos was originally named the Umanac after a well-known rock outcrop in Greenland. The Umanac mountain is depicted in this lovely wooden mural that had been salvaged from the reception area on board the Logos. This mural is now displayed at the Puerto Williams Naval Base not far from the wreck. 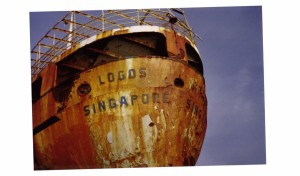 Originally registered in Singapore, the ‘caged’ area above the rope deck was ‘the poop deck’ – the play area for the ship’s kindergarten.