With the general financial decline since the collapse in 2008, many people have become thrifty. Websites on how to save money are thriving and, as people start to worry about their retirement pensions and growing debts, a real divide seems to be appearing in society. While some have tighten their belts to keep out of debt, others have sort debt management help from groups such as CAP UK.[a] However, with the help of social systems in the West and easy credit in recent decades, a number of people have thrown caution to the wind and have chosen to live life to the full while only paying off the minimum balance required on their growing number of credit cards. If it isn’t already, their debt will eventually become a debt that can’t be repaid.

With that said, most of us would not want to be so immersed in debt that there’s no way out. In July 2011 The Independent reported:

“Suicide rates have risen sharply across Europe since the banking crisis as people struggle to cope with debt, unemployment and public service cuts. Britons fared worse than average, with an 8 per cent rise in suicides between 2007 and 2009… The Irish have suffered a similar fate, with a 13 per cent rise as people face up to home repossessions and dire long-term prospects.”

With no light at the end of the tunnel and no way of repayment, death is seen as the only solution. But what has any of this to do with today’s chapter about a couple who lived four millenniums ago?

This overwhelming oppression, that suffocates LIFE from the human soul, was at the top of the Creator God’s agenda from the beginning. His plan was a global initiative and it was to “bless all families on earth”.[b]  To do this, He simply had to find someone who’d believe in His dream…

Without weakening in his faith, Abraham faced the fact that on a physical level the spiritual promises of God were impossible. [v19]  He and his wife were old and unable to have children, yet he didn’t waver through unbelief regarding the promise of God, but was strengthened in his faith and gave glory to God. [v20]

When our son Michael died, we also had to face the fact that nothing good seemed possible on a physical level. Like Abraham, though, and without weakening in our faith in the promises of God, we trusted in the God 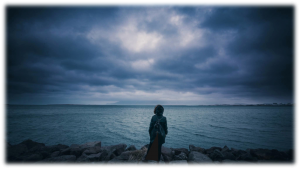 who gives life to the dead and calls into being things that were not. [v17]  By not wavering through unbelief regarding the promises of God, we then seemed to be supernaturally strengthened in our faith and able to give glory to God as we encountered His Breadcrumbs in the Storm.

By not “wavering through unbelief” Abraham’s faith was reckoned to him, or credited to him (imputed to his account) as ‘righteousness’. If the account of his life was a debt owed to the One who gave him life, Abraham’s debt (concerning what he’d not done, or done wrong) was written off. In other words, across the account of his life – when the court is seated and the books opened[c] – would be written: “free from the consequences and no longer held accountable”.

So before the Creator God Law was introduced in the days of Moses, in the Book of Exodus onward, Abraham was considered “righteous”, simply because of his faith in his Creator’s Master Plan for this world. If this isn’t amazing enough, this “imputing of righteousness” also happened before Abraham was circumcised. [v9-12]

Ok, now I can almost hear you thinking, “Good grief! What on earth has cutting a piece of skin from a man’s ‘unmentionables’ to do with righteousness!” Well, that’s all part of the storyline all the way back to the first book of Genesis. It’s still important for Jews and Muslims (monotheistic religions) today who follow the Creator God’s Law. Like a tattoo or branding God’s sheep, this was a small private act that physically set apart Abraham and his family, his workers and everyone living under his umbrella, from everyone else. But it couldn’t make a person any more “righteous” than the Law could. That’s where “faith”, from our side, and “grace”, from our Father God’s side, gets woven into the fabric of HIStory.

Many people won’t be able to relate to our storm, or the promises of God that we were holding onto after our Mikey left us. Many will struggle to relate to Abraham’s ‘farfetched’ promise of not only a son in his old age, but the implausible idea of also being heir of the world [v13] but Father of Faith

in many nations. [v17]  Having said that, we all have to personally work through ‘wavering in unbelief’ in our Maker today, when it comes to the free credit God is offering [v23-25] and the amazing grace that’s found in our Creator God’s Word.