When I first read this chapter, I thought: “Good grief, this’ll take several readings to get my head around it!” So, if you’re finding it difficult to understand, just write in the comments box below. In time, we can journey through it together. To begin with, it’s good to know that this chapter is part of a letter to Jewish and non-Jewish Followers of Jesus who were living in Rome, in the 1st Century AD.

With the tight control across the Roman Empire, and good basic infrastructure (particularly roads), news about Jesus had spread quite easily throughout the Roman world. Within months of Jesus’ resurrection, 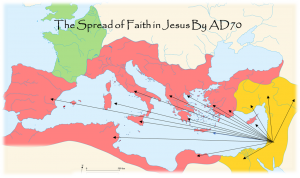 there were Jesus Followers returning from Jerusalem to many countries: Parthians, Medes, Elamites, residents of Mesopotamia, Judea and Cappadocia, Pontus and Asia, Phrygia and Pamphylia, Egypt and the districts of Libya around Cyrene, and from Rome, both Jews and proselytes, Cretans and Arabs.[a]

Through these early Believers, a lot of teaching had sprung up, both good teaching and bad teaching. Paul, a Jewish academic trained in Judaism from a young child, was able to write letters to explain where Jesus fitted into the ancient prophecies (the Creator God’s existing script, now called the Old Testament), what Jesus did on the cross for the whole world, and how “forgiveness of sin” now affects our way of life.

Today’s chapter can be broken up into two parts and both can be understood if you can imagine that our Maker is our Father. If the Creator God were a Good Father, then He’d act with impartial fairness. And, any discipline

would be rightly based on what His children know is wrong – whether that knowledge came from His specific teaching, or their own conscience – deep down they knew it was wrong because they felt that it was wrong instinctively in their heart. A two-year-old, for example, who takes money from its mother’s purse, is disciplined differently to a 10-year-old taking the money. The older one is old enough to know what’s right and wrong, but has chosen to steal. The younger one likes those shiny circles and wants to put them in his pocket. The younger one will kick and squeal on the floor, not understanding why he can’t keep those shiny circles that he found. The older one will hide in the shame of being caught with them.

In this same way, our Father God will interact with us individually, on His “Day of Judgement”. When the children come running into His House from the garden, all crying and fighting and blaming each other, Father God will sit down on His judgement seat, line us all up, and one-by-one make a right assessment of each one of us in this way…

So, Shakespeare’s statement: “To Be or Not To Be” really is the question. The choice is ours and it’s as simple as it was when we were little children. Will we offer to our Father God “goodness” and be acceptable, or not?[d] No-one on the planet has an advantage, or excuse.[e] We’re all in the same boat. When we meet our Maker (and, according to this gospel – this “good news” message), Father God will assess the secret heart of us all, through His Right-Hand Man[f], Christ Jesus our Lord. [v16]

The Second half of this chapter expands on how this “divine assessment” is impartial and “just”, yet still possible when some people have access to the rule book while others don’t. One way to get your head around this, is to imagine that you’re in charge of a sleep-over with the friends of your children. Now, there’s six kids in the house instead of three, and only half of them know your house rules. How are you to keep order and discipline with all six children, so that the sleep-over is a fun time for everyone?

Those who don’t know the house rules are disciplined according to the basic idea of conscience. At their age, they should know better i.e. they don’t jump on the furniture, they don’t write on the walls, and they don’t steal things from the parent’s bedroom. Why? Because you should naturally have common sense, even at six years old, to sense instinctively that when you visit people’s houses you’re on your best behaviour. If they won’t listen to correction, they’re likely to be rejected – you’re glad to see them go and won’t welcome them back, if at all possible!!

At the same time, the children who belong to the family, and have been taught the house rules, have two jobs. They’re not only required to follow the house 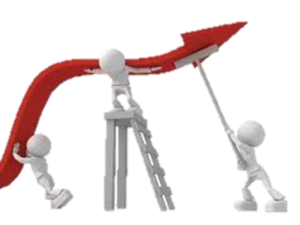 rules (especially when the house is full of their friends and mum’s run off her feet), but to also assist in helping their friends to follow the house rules. While the family children aren’t blamed for the bad behaviour of their guests, they would be in trouble if they saw their friend’s bad behaviour, but ignored it, didn’t say anything to help stop it, or joined in with it!

In this same way, Paul is giving the new Believers in Rome a choice: To Be or Not To Be appropriate members of God’s family. If they bear the family name and rely on the house rules; and if they boast that they know the Father’s will, and approve of the essential things that He has in the house rules; if they’re confident that they can be a guide for others (a corrector of the foolish, a teacher of the immature) according to the house rules – will they not behave themselves, the way they’ve passed on those house rules? [v17-21] Once the house rules are made known to the friends visiting the house, is it not now an embarrassment to the Father, when His own children behave exactly as they should not? [v22-24]

There are many stories where children were children in family name, but the parents don’t know what went wrong with them. As a result, they love their children but the family relationship has broken down. They’re estranged from the very ones who carry the family name. At the same time, you may have heard the phrase: “You’re the son/daughter I never had”. It’s spoken of others who have come into the family home and have been wonderful to the parents, filling the shoes of those who are no longer there or are too busy to bother. Surely those who act as beloved children are valued as greatly as birth children. Some are adopted in, and given an inheritance in the family Will. [v26-27]

Paul, in today’s chapter, speaks of the circumcised and the uncircumcised. This dates back 2,000+/- years earlier, to Abraham, who entered into a covenant agreement

with the Creator God. The outward sign was to submit himself to being circumcised. He then circumcised every male in his household – 300+ men.[g]  If the Creator God is a shepherd, this was like a way of marking His sheep. But by the 1st Century AD, the family sheep were relying on their branding and not on their behaviour. [v24-29]

This is still happening among Jesus Followers today, when we christen our children, for example, by branding them with a cross in water on their forehead, and getting their name recognised. We have a family party but ignore the need for understanding the house rules any time after that for the rest of their lives. Apart from showing up at Father God’s house for family celebrations once or twice a year (at Christmas and Easter, or for weddings and funerals), the branding does little for the behaviour and lifestyle. We forget that branding is of little value without practicing what that branding means. [v23] Someone once said, “Going to church does not makes you a Christian, any more than going to McDonald’s would make you a hamburger.” [v28]

So, when it comes to my Maker forgiving me (and putting up with my quirky little issues today), I don’t want to show contempt in return, simply because I’ve not realized that my Father God’s kindness is intended to lead me to “repentance” – a lasting change in my heart. Instead of looking for some sort of advantage (finding a legal excuse or ticket in, which guarantees something from the Creator simply because He made me), Father God’s patient training every day has only ever been in the hope that I’ll pray to Him right now to take away my sin, to heal away my brokenness, and to change my heart again…

If I can get my head around the simple choice that I have today: To Be of Not To Be, I may go a long way in BE’ing an active, functioning, prized asset among the children of my Maker’s family.[h] And that, in the end, divine praise will come to me from my God. [v29]