When reading a chapter like this, one could be tempted to quickly skip through it. It’s like reading a flight schedule of a plane that went down. We’re not interested in where in came from and the airports it stopped at! We want the real story – the bit where it crashed and what happened next. So the first thing I notice about today’s chapter, is the level detail.

If the New Testament was waffle, designed to trick people into believing in a fairy tale, there wouldn’t be so much information that could be 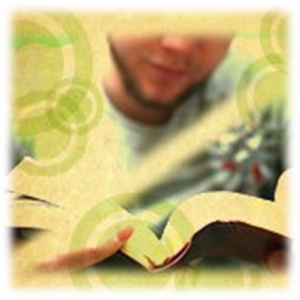 later verified. By mentioning the Day of Atonement Feast [v9], for example, we can still verify weather conditions on the Adriatic even today. By mentioning all the ports of call, we can verify on a modern map if the story could be true. This level of detail – however boring it may seem at first – was then miraculously protected so that we can even know the name of the Centurion! If our Creator went to so much trouble to get the plight of a trouble-making prisoner into our hands (when it would be easy to lose such a seemingly insignificant piece of information from the ancient past), I want to ask “Why?”

Instead of writing it off as useless information, our intelligent Creator wants those He created to think intelligently about His Epic storyline. He wants us to have faith but that our “faith” is based on solid ground. Everything in His rendition of HIStory can be tested and shown to be true, for those who want to believe.But when I read a chapter like today’s, it seems to me that times haven’t changed. We’re still left wondering about the nature and involvement of the God who’s watching on.

With 276 people in grave peril [v47] on a boat without power, and being driven mercilessly across the Adriatic by a raging storm, today’s chapter could be describing the plight of Middle Eastern refugees who are currently flooding into Europe, and dying along the way. 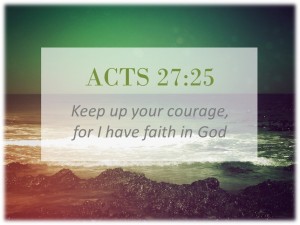 So what I find interesting with this chapter today, is God’s idea of “Good News”. Paul had yet another vision – and, wow, it’d be great to have visions wouldn’t it?! However, the message wasn’t about escaping everything negative that was to come. The good news was that Paul didn’t have to be afraid. [v24]

As I engage with the life experiences of others, I can’t help but filter them through our own life storm. In 2009, we too were swept along by the currents of our own raging sea. We had suddenly and unexpectedly lost our only son and we were given no medical reason why. So it’s a chapter like this that causes me to think now about our Maker’s idea of “good”. It seems to me that the problem comes when we use a limited filter for processing our life experiences.

There seems to be an unspoken desire to filter the Creator God through our own grid. And, in the case of stories like the one in today’s chapter, we want Him to use our own definition of “good”. But, like Paul – who had faith in a personal promise of protection in the storm [v34] – it was our hope in ‘the God who Knows’, that steadied our course. He was our sea anchor [v17] out there somewhere in the darkness beneath us. Through the Creator’s goodness, we’re not shipwrecked but stabilized as we float on life’s pounding waves.