The first thing that I notice about this chapter again today, is the detail. [v1-3] 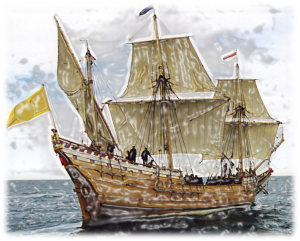 If this is a made-up story to complain about unfounded religious animosity, it wouldn’t have been wise at all for Luke to add so much detail to this second extensive report to Theophilus.[a] As a Roman official, Theophilus would have access to shipping activity in the Mediterranean and, proving one part of the story wrong, would bring the rest of Luke’s report into question.

The fact that Luke adds all this detail, shows that he has nothing to hide. What he’s writing is an exact account of what actually took place. That being so, we can now concentrate of unpacking what happened so that we can begin to understand why the Creator God would have miraculously preserved this private document between Luke and Theophilus, so the we can read it today. My guess is that, because the Creator doesn’t do random, it holds significantly important guideposts for our FAITH journey. So, what have I learnt?

Well, Paul sort out Believers in Tyre, which means that the Creator’s Good News had spread to Syria, and people were following The Way as “disciples” – learners. [v4] This was their pattern wherever they went and apart from being safest in doing this, 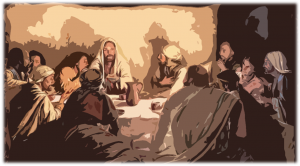 they were able to meet all sort of interesting people. [v7-9] Philip was the man who had a bizarre encounter with an Ethiopian Eunuch.[b] He was also one of seven picked in Jerusalem for leadership, because he was known to be filled with the Holy Spirit and with wisdom.[c]

And yet, dotted in this story of nice moments, is a growing concern for Paul’s trip to Jerusalem. So much so that all the Believers in Tyre turned out for Paul’s farewell and – not caring who was watching, or what negative backlash may be caused from other religious groups – the entire group knelt on the beach to pray. [v5] Now, Paul’s visited by a prophet from Judea with a very definite message of backlash ahead. [v10-11]

But there’s something in this story that’s important to remember. A prophet doesn’t always work for Father God i.e. there are false prophets.[d] So Paul had to sift the information that he was given. Logic would have told him that it couldn’t be a simple coincidence that a number of people were saying the same thing. So, was Father God telling him to avoid Jerusalem? Or was He just telling Paul, ahead of time, so that he’d not taken by surprise and left confused?

When we get prophecies today, we need to weigh them up with God’s Word and with His Holy Spirit within us – praying for discernment. Wisdom is: using the knowledge we have rightly. And, by the way Paul responded [v12-14], we can see that he was putting puzzle pieces together.

Everyone knew that his countrymen had persecuted and killed the prophets in the past, and then killed Jesus.[e] So the outlook wasn’t bright!

But more than this, Paul knew two things:

Knowing that the Creator God’s Will, will always be done [v14], Paul knew who his Maker is and what He’s capable of. He could rest assured that his Maker had him firmly in hand.[h]

And so, upon entering Jerusalem, Paul met with the “elders” – the original disciples including James, Jesus brother. [v16-19] It’s therefore worth noting again here, that Luke (who was traveling with Paul) and Paul had time here to receive first-hand information about Jesus from those who lived with Him. In other words, the writings that we have today, are from real people who had first-hand access to Jesus. Or, in Luke’s case, first-hand access to those who knew Jesus.

It’s also worth mentioning here that even “elders” can get it wrong. In a bid to protect Paul, a plan was devised to demonstrate Paul’s commitment to the Mosaic Law. [v26-26] The idea was to shave their heads and go through a purification ritual – a thing that was commonly done under the old covenant Law given through Moses, but not necessary once grace and truth were realized through Jesus Christ.[i] 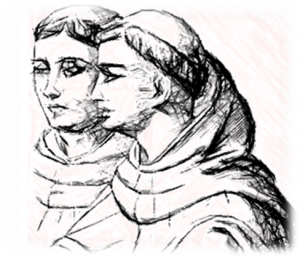 Purification was about repentance and cleansing – saying sorry to the Creator God and going through a “spiritual detox” to get your act together, before re-setting your lifestyle with a firm commitment to the right path thereafter. If Paul needed purification at all, the plan to use it for gaining credibility with his fellow countrymen, didn’t work! [v27-29] God’s Will was done and Paul was arrested, just as predicted.

All this happened to Paul in Jerusalem, the city where he had been a religious zealot. With extreme religious intolerance, Paul had once gone house to house dragging out Followers of The Way, to throw them into prison – where he “breathed out murderous threats against the Lord’s disciples”.[j]  With the same level of religious intolerance, the tables have turned in today’s chapter, and Paul is now the one being dragged from the Temple courts and beaten. [v30-32]

With no two witnesses with the same accusation – a thing that was needed by the Law of Moses[k] – they were planning on killing Paul without a fair trial. [v31a] The irrational religious intolerance at the start of a 2,000-year-old argument, had become out of hand with the 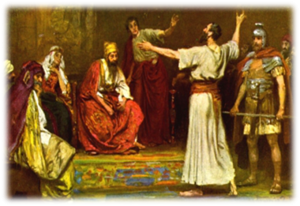 whole city in an uproar (similar to the day Jesus died), and a troop of Roman soldiers had to be deployed to save Paul! [v32-34] And so began Paul’s long journey fulfilling what Jesus had told him. It would be a fulltime and life-long calling that would take him before governors and kings for the rest of his life.