As I sit in my quiet house typing into cyber-space, I wonder whether any of this website is worth it. When few are interested in listening, I find it hard to mobilize the message of the Creator God’s Global Plan – no matter how good the Good News is.

It seems easier to just type out my innermost thoughts then, like the find of buried treasure[a], pray that someone might stumble upon it one day in a “Google search”! I’m not sure what results I expect from my “mobile messaging service”. Every day I write, I’m writing about “a sign to be opposed”.[b]

Pushing aside the melancholy, however, I can’t help but feel called to follow in the footsteps of John – to prepare the way for the LORD.[c] The message that John called out 2,000 years ago, is both simple and yet relevant for us even today: The Kingdom of God really is at hand. We now have only one task – just one thing is expected of us. All we have to do is, prepare the way for the Lord – beginning first in our own hearts. And, because the life and death of Jesus was covered in my Breadcrumbs during March/April, I want to follow through now with the prophet Malachi’s vision, just as we’ve been doing over the past five days:

“See, I will send my messenger, who will prepare the way before me. Then suddenly the Lord you are seeking will come to His Temple.” [Malachi 3:1]

Over the past four days, we’ve seen how Malachi’s prediction was fulfilled in the first chapters of the Book of Luke. We also saw that in a very short time, the “messenger” was in prison and the “Lord they were seeking” was rejected and almost thrown off a cliff![d] So was there a Plan B in the Creator God’s mind, or were the stories that followed, and will follow, also a fulfilment of HIStory.[e]

Malachi’s vision is from the 4th Century before Christ (BC). But as with all seventeen prophetic books that I’ve been following in my Breadcrumbs since early August, there’s always a physical and immediate fulfilment, yet always coupled with mid-term and long-range spiritual elements to the predictions. And so, in fulfilment of the prophet Isaiah’s vision, Jesus came, lived, and died.[f] But that wasn’t the end of HIStory. By way of a vision in the Book of Daniel, our Maker’s epic storyline continues, when Jesus was taken up to heaven.[g] He left quickly and simply, as if all of this was part of an unbroken storyline all along. [v9-11]

We pick up HIStory today in the Book of the Acts of the Apostles – or “Acts” for short. The “apostles” were Jesus’ closest friends. They’re the “sheep” that would be scattered – according to the ancient prophet Zechariah’s prediction.[h]  Acts is also written by Luke [v1] – the doctor who had written the Book of Luke. So it’s a good follow-on from the Breadcrumbs that we’ve been following over the last four days.

One of the first things that catches my interest, in today’s chapter, is the subject that Jesus chose to talk about after He was raised from the dead. He talked about the Kingdom of God. [v3] This was John’s pet topic when he first came out on centre stage in Part Two of the Creator’s epic Play: “Repent, for the Kingdom of Heaven is near!”[i]

Some time back, my Mark met a Jewish man through his work. After the meeting, Mark did as he has always done since our Michael died – he handed him his tract: “The Father’s Love”. It’s about a father who lost his only son. The man was moved because of his own loss of a loved-one. His response was loving and genuine with a real sense of connection in grief. What was interesting, though, was that he didn’t want to enter into a discussion about the after-life.

I couldn’t help but think, “Isn’t our Father’s Kingdom the only discussion worth having?” It would be like Adam and Eve sitting outside the

Garden of Eden and saying to anyone who came along: “I don’t want to talk about the garden.” Surely every waking hour would have been about what it was like inside and how to get back in the door. Surely, in their rejected state, there was nothing in their mind, desires, or interest that would cause them to look out and away, let alone actually wander away to explore other things.

I would have sat outside the garden gates pining away until I died of grief, for what I once had but now have lost. Food would lose its savour. The air would smell stale with corruption. In a land abundant with rain, the ground would seem hard without life because green is no longer green when you’re colour blind. The only thing that I can think of that could have caused them to move away from looking through those closed gates, was that the Creator’s garden somehow disappeared. Their inbuilt ability of see into His Kingdom was removed when they could no longer experience it. They had no choice left but to wander far and wide in search of where they really belonged.

But what has this to do with Malachi’s prophecy about a “messenger”? And how does that connect with the last four days in Luke and now Acts 1? Well, far from a story over [v6-7], Jesus now unveils the Creator’s long-range prediction by bringing in Joel’s prophecy [v5]: 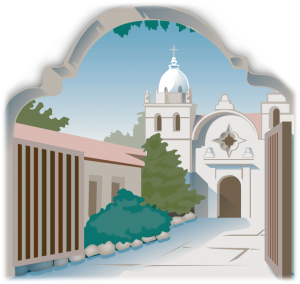 We, Jesus’ Followers (both men and women, young and old), have all been left now, where John started: God’s “messengers”, as a mobilized messaging service, sent out to “prepare the way for the LORD”. But we weren’t called to start a new world religion with temples and priests and sacrifices. The people whom the Creator has made in His own image to be like Him, have been called to speak – just as God spoke, in the beginning.

The message: All people everywhere, in every generation, must “make straight paths in their lives for Him” because “all mankind is about to see God’s Salvation”.[j] It’s a simple message and, everything in the rest of Part Two of this Epic Play – what’s now called The New Testament or, The New Covenant (agreement) – everything that you’ll read in my Breadcrumbs until the year ends – is all geared towards the coming Lord who will appear suddenly, just as Malachi said He would.

So, if you take this journey with me, what you’ll be reading over the next months will be an expanded version of what John started to tell us[k], but couldn’t elaborate on it in detail. This was firstly because he got his head chopped off, but it’s also because the Law of Moses requires more than one witness to make it truth.[l] There’s four witnesses to Jesus life stories in the books of Matthew, Mark, Luke and John. In addition, the 27 books/letters of the New Testament (that’s last ⅓ of the Creator God’s Handbook for LIFE) are written by nine more Jews, all thoroughly educated in their Maker’s story in their own Hebrew Old Testament.

From the very first sentence in this Book of Acts, we can see that Luke is not an uneducated fisherman writing down fairytales. He’s instead a non-Jewish doctor who’s putting his educational abilities to use, by writing an official report for a Roman politician. [v1] It’s estimated that around 500 people saw Jesus alive in the 40 days after His crucifixion and miraculous resurrection. [v3] And again, Jesus reiterated a message that He’d previously given: 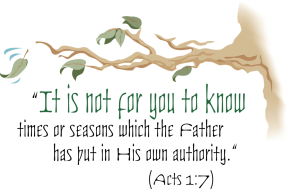 that we’re not to know the time and the date when He’ll return. [v7] Only Father God Himself knows the time and the date.[m] Our role is simple: to ensure that the Good News of the Kingdom of God – as it has been written since the days of Moses[n] – is mobilized and sent out even to the remote parts of earth. [v8]

The rest of today’s chapter is about replacing the disciple Judas, who had betrayed Jesus and died in the process. [v16-20] Twelve has always been a significant number for “completion”, throughout HIStory. The fact that Jesus chose twelve to be “apostles” (spiritual leaders), caused Peter to suggest a replacement for number twelve. But because of what’s about to come in my Breadcrumbs, I wanted to leave you with a thought…

Even after living with Jesus, working with Him, and even sleeping beside Him, spiritual leaders aren’t perfect. They do indeed choose Matthias to join their leadership team [v21-26], but I notice that nothing’s ever said about him again. Instead, Jesus Himself seems to choose a man named Paul.[o] It was this Jewish academic and member of the ruling council, that Jesus seems to use extensively as a mobile messaging service throughout the Roman Empire, in the rest of Part Two of HIStory.

Much of our teaching on how Part Two fits with Part One (how the new agreement fits with the old agreement), and what the Creator God now expects of His people, was written down by Paul, used for “Jesus Followers” for 2,000+ year, and now translated and spread out to every tribe, nation and tongue on earth. Paul, and the twelve in today’s chapter, were HIStory makers. So the question is: will you join your Father’s mobile messaging service to the world, and make HIStory too?