PHILIPPIANS 1: THE KEY TO KNOWLEDGE

It was October 24th 2014 and, Mark was about to head away on another trip with his work. 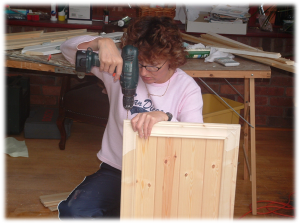 I’d been designing a cupboard for our kitchen and Mark wanted to get it built before he left. We’d dismantled a pine bed that he had built sixteen years earlier. Then, with wood taken from bookshelves that were no longer needed in his office, we had what we needed for the job. The plan was to join planks of wood together from what we had, to make up my new kitchen cupboard.

But joinery is actually a hard thing to do! Those simple boxes with shelves in them, that are currently dotted about my kitchen, aren’t so easy to replicate from a discarded bed and bookshelf! The main problem we faced was a radiator that couldn’t be move. It happens to be the last radiator on our heating system. And, being closest to the back door, it has the valve for emptying the system. I was under orders from Mark not to cover up the radiator, because he’d need to have access to it. So, I sat designing (and re-designing) for three days. Each night, when my brain ‘debriefed’ in my sleep, I’d wake up knowing the support flaws in my latest plan. Over the course of the week, I ended up changing my design three times and, the plan I settled on, was an elaborate one…

My clever cupboard had removable panels made up of planks of shelving wood, braced together with little metal brackets. I even made notes on the plans for where the brackets and screws should be positioned, on 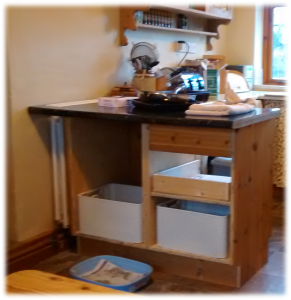 Armed with my long list of items (including 28 right-angle brackets and 13 straight brackets for connecting all the planks of wood), we headed off to the DIY shop. However, every time I put an item in the trolley, or I asked Mark to help me find it on the shelf, he’d ask what it was for. After telling him, he kept saying, “Well, that won’t work because of abc.” Or, “Wait, that’ll be cheaper in xyz shop.” We left the shop after half an hour of going up and down all the isles, without having bought anything!!

By the end of the day, we’d manage to buy a heat-shield and brackets in another shop but, by evening, Mark had changed my plans. He went out after dark and bought a large panel of thick plywood, to make a simple box cupboard like all the other ones in our kitchen. Oh and, by the way – he didn’t need a hatch-door or removable base board, to get to the radiator. The valve was within arm’s reach on the exposed side. 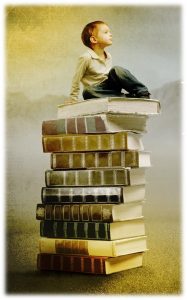 I flopped into bed that night, tired and cross at the wasted hours during the previous week, for a plan that was improvised from a bed and bookcase! With extensive information, on any topic, readily available through a simple google search, I’m still struggling to “discern what’s best” – even for a basic box cupboard! So, today’s chapter makes me think about how it’s possible to discern what’s best, when it comes to the most important questions of all: Who made me and, having bought me at a high price, is He now capable of carrying on His good work to completion?

Today’s “breadcrumb” comes from the first part of Paul’s letter to 1st Century Believers living in the Roman city of Philippi. He starts with offering “Grace and peace” from “God our Father”. [v2]  But it’s interesting to note that Paul’s writing this letter while sitting in chains as a prisoner of Rome. All this makes me wonder if we could dismantle our life, and reconstruct it into something better, would the bear essentials for starting over be grace (the sense of blessing) and peace (the sense of protection)? These are offered to us from our God and Father – the One who originally designed us and made us in His own image.

This “gospel” [v7] is the Creator’s “good news”, and it begins with being “confident that He who began a good work in me will carry it on to completion – even if He has to keep working on me until “the day of Christ Jesus”, when Jesus returns. [v6]

Paul’s letter quickly becomes personal [v12-18], and you may be tempted to think, “What on earth has any of this to do with me?” – especially when it’s intended to be a letter to the believers living in some ancient Roman city in the 1st Century AD. But, quite miraculously, the Great Story Teller, has managed to keep this personal letter (which is only two sheets of paper in my Bible) safe-guarded uncannily for 2,000 years, when many other documents from the ancient past have been lost! So why would a 1st Century letter end up in my hands today?

Father God doesn’t want our love for Him[a] to be based on “fairy tales”, but strong in “real knowledge and depth of insight”. [v9]  If I’m wanting to be found “pure and blameless for the day I meet my

Maker” [v10], I’ll need to be “filled with the fruit of righteousness” that comes from Him. [v11] With these keys to knowledge in my hands, I’ll be able to discern what’s best/good, and then “approve the things that are excellent – to the praise and glory of God”. [v10]

What I find interesting is that Paul had an “earnest expectation and hope”, that he’ll not be “put to shame in anything”. [v20]  He said: “I know that this will turn out for my deliverance through your prayers and the provision of the Spirit of Jesus Christ.” [v19]  And yet, history doesn’t give us any proof that Paul was ever released from prison. So, why would a “good God” allow a seemingly bad story (of a Follower in chains for his sincere efforts), to be told and retold these 2,000 years?

The story shows that the Creator God works in complex ways – far beyond what I could ever imagine or hope for – and it’s almost always inside “the bigger picture”.

Whether released or not – in chains or free – Paul had one prayer that was answered: “…that with all boldness, Christ will even now, as always, be exalted in my body, whether by life or by death”. [v20]  Two thousand years later, Paul’s letters are printed and reprinted in the best-selling book of all time. They’ve been translated into over 2,000 languages and sold and read in every country on earth.

This tells me that my Maker hasn’t stuck my life together, with bits of discarded stuff from the past. He hasn’t put me together (or reassembled me), with screwed-in brackets – like a motley patchwork and braced in every hidden corner. The key to knowledge is confidence in my Father God. Whatever happens in my life (good or bad), my prayer is that I’ll stand firm and in no way be alarmed. This is a sign of salvation in me and, this too, hard as it is, is also from God. [v28] The bigger picture (if I want to follow in the footsteps of Paul), seems to include not only believing in the Creator God and His Word, but also to suffer for His sake. [v29]

After experiencing the good, the bad, and the truly ugly, it’s clear that Paul had some idea of “a bigger picture”. Torn between the worlds [v21-26], Paul knew that there was more to this life than what was right in front of him. That same Faith in the Eternal LIFE, provided by our Heavenly Father, was what got us through when our only son left us for his Maker’s Kingdom. 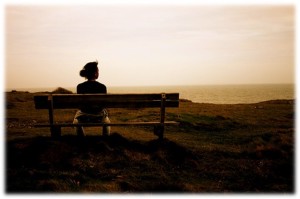 Whether I understand that bigger picture or not, my role now is to “conduct myself in a manner worthy of this gospel of Christ” by standing firm in one spirit, with one mind, striving together with all Believers [v27] for the faith of the Creator God’s Epic Storyline – His extremely “great news”!