When we first moved into our house, there were several things in the garden that had to be removed: a garage with an asbestos roof; a 20ft-long cement slab that had been a dog run; 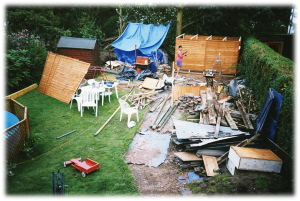 several half-grown trees had to be dug up, and a huge sprawling oak tree had to be trimmed back to a manageable clump at the top of its trunk. Then, there was a moss-covered pagoda that had to be dismantled and its 12ft oblong-shaped cement slab jack-hammered up. When all these were cleared, it was time to rotavate the ground before we could sow grass seed.

At this point, we discovered that our garden had been a land-fill site. It was filled with stones and broken crockery. But since our row of houses ran parallel to the original line of Hadrian’s Wall – a wall built by the Roman Emperor Hadrian, around 130AD, to defend his empire – I told our children that they could discover buried treasure and Roman pottery, if they came outside to help their parents clear the soil!

The plan worked wonderfully and every piece of broken crockery we “excavated” from the soil was examined for Roman markings. Every piece was declared, from my extensive expertise, to be “possibly Roman”. Unfortunately, our youngest daughter was in her late teens when she finally discovered that none of it was Roman! Her childhood years had been spent telling her friends about the Roman pottery we’d discovered when we dug up our back garden!    …Ooopps…!

The idea of digging for buried treasure was only a ploy to get the children excited enough to work! So, what caught my attention from today’s chapter, was the fact that we have two options when it comes to treasure. We can bury it or use it.

In chapters eight and nine of his second letter to the Believers living in the Roman port city of Corinth, during the 1st Century AD, Paul was trying to explain our role in HIStory. How we fit into the Creator God’s story in the lives of those around us.

Based on the fact that we’ve been strategically designed in the image of our Creator, to be like Him in our environment[a], we’re now His ambassadors.[b] So, all issues faced in this life (including the issue today of giving to the myriad of needs out there), we simply have to ask: “WWJD? … What Would Jesus Do?”

Because today’s chapter is part of a letter, some of it may appear to not directly relate to us. v1-5, for example, is about preparing a gift for 1st Century Believers in Jerusalem. Still, we can “glean” from its eternal truths that don’t change in time or, when transported across cultures and situations today. When we have an eagerness to help, for example, we may not have anyone boasting over us, like Paul seemed to be boasting over these Corinthians. [v2] However, we do know that Father God is eager to help us.[c] Like any father who boasts over the good activity of his children, our Father God wants to “give glory” to His children.[d]

To live in His “likeness” as we were originally designed to do, we respond eagerly to calls for help – just as He does. And, like a field when scattered with seed, what is scattered will grow. So we need to be encouraged in this wonderful truth that everything we scatter from our own resources will grow and produce what we’d hoped it would. [v6] But we shouldn’t be pressurised by what others can do, then give out of compulsion. Each of us should just go with what’s in our heart – what our conscience, and Father God’s Holy Spirit within us, is telling us to do. [v7] In this way, it’ll be given cheerfully, without reluctance nor done grudgingly. Now if this isn’t “good news” enough, quite incredibly, when we freely scatter our gifts to the poor, our righteousness endure forever! [v9] 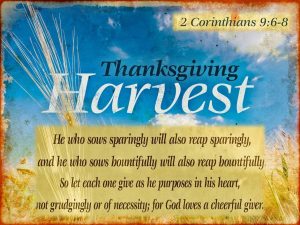 To understand why the Creator God gets upset, and why His Judgement Day has been set in time, we need to understand that we’ve been specifically built to be like Him. In addition, Father God is able to bless us abundantly, so that in all things at all times, having all that we need, we’ll abound in every good work. [v8]

By not being the sort of “children” (image-bearers) that we’re capable of being, from a parent’s point of view, is just plain selfish and no doubt annoying for our Father to watch. Just as He has supplied seed to the sower and bread for food, He’s promised to supply and increase my store of “seed”. [v10] 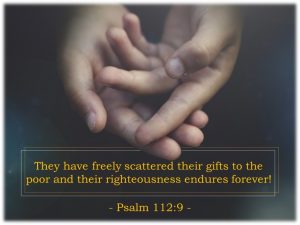 The outcome, if I’m willing to engage in what He’s helping me to do, will end up “enlarging the harvest of my righteousness” – ready for my Day of Judgement. In the meantime, I’ll be “enriched in every way” so that I can be “generous on every occasion”. [v11] This “enrichment” isn’t necessarily about money. It’s being an enriched person who can help on every occasion – in varying situations.

Like a water-wheel on an old barn, the circle doesn’t stop there. Through my generosity (even if that’s just being generous with my time, effort and energy) and any “service” that I perform, is not only supplying the needs of others, but it’s causing the overflow of many expressions of thanks to God. [v12] Others will praise God for the practice matched by the words that I talk about. [v13] So, treasure isn’t always money. My treasure, where my enrichment is drawn from, is God Himself…

Far from giving grudgingly [v5b], or being a drudgery to uncover my “buried treasure” within, putting myself out for others, the circle has come back around to me. As a family, we’ve certainly experienced the prayers and encouragements as people’s hearts have gone out to us [v14] – most especially over the past nine years since our son passed away. Like Paul (who lived not long before Hadrian began planning his wall less than 400 yards from our house), we too can thank the Creator God for His indescribable gift of all-surpassing grace given to us! [v15]