Among people I know, I can list off situations of domestic violence, divorce, separation and affairs

that include an attempt at murder, suicide, sexuality switch, and a terminal cancer victim having one last ‘fling’ – and none of it surprises me. My marriage was also at a point of complete destruction 25 years ago such that it seemed impossible to  reconstruct it again.

While it’s possible today to obtain a divorce with ease, what’s more unusual is being happy enough, in ourselves, to be content with our ‘lot’ in life – the place assigned to us. [v17] So, I think what stood out for me, in today’s chapter, were the small phrases, for example, “…since there is so much immorality …” [v2] It seems that most of what Paul was saying in the 1st Century AD, was to combat a moral decline that’s a more-than-real issue today. Without the rules, or advice to the contrary, there’s nothing to stop a society of families being destroyed by self-centeredness, inability to hold one’s ground, confusion and disorder. 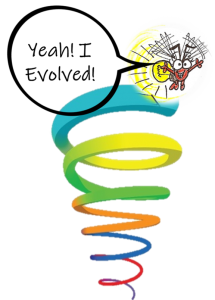 In a broadcast interview over redefining of the English word “marriage”, a Welsh gay-rights lady said, “Marriage is evolving”. The idea of evolution was first introduced by Charles Darwin in 1859 but with all the studies since, it still remains only a theory, even today. The Theory of Evolution is its full title, but we seem to forget the “theory” bit! In reality, the promise of a gradual, perpetual, ever-present spiral upwards, seems to have no affect at all on our continually declining societies, beginning first with our relationships.

If only a theory, then it’s clearly disproved in an everyday life which is continually spiralling out of control. Life, for most, is a determined grip to keep things together. If a spiral exists, then it’s a whirlpool and we’re clinging onto the bank by our fingernails, praying that we’ll not get sucked into becoming yet another statistic! Ask any police officer, social worker, judge or divorce lawyer, if we’re evolving into anything that’s better than what we currently are, and they’re likely to respond in disillusionment.

Enter stage-right, Paul the Apostle: a 1st Century religious academic with radical, zealot tendencies; single; likely to be a geek that women would find hard to fall in-love with; possibly over-weight because he doesn’t think body-building is “spiritual” enough. And, all of the above pretty much counts him out for any discussion at all on how to get, and keep, emotional relationships! So, what has this letter to do with me today?

An important thing to note with any of these letters (written by those living in the decades after Jesus), is that our translations today will have deficiencies.

For example, in my translation Paul begins by saying, “…it is good for a man not to touch a woman…” [v1] Taken out of context, and in certain cultures today, that could mean that men can’t hold a woman’s hand; sit next to her on a bus or plane so that they touch; hug their sisters or kiss their mothers. Because of that, if you have a problem with what the bible says, don’t throw it out the window. Buy 1-2 more translations (if possible) and, if you know another language, buy the Creator’s Script in a second language.

Most people today will read a snippet, reject what it says as outdated and culturally irrelevant, then disagree with the whole of the Creator God’s Storyline. When we don’t get it, we need to go deeper, not walk away from it. So, the questions we need to ask are:

This portion of Paul’s letter, written to those living in the Roman port city of Corinth, is about inter-personal relationships in light of our relationship with our Maker. He was answering their questions [v1a], and address moral decline in that city. [v2a] If you don’t currently have a working relationship with your Maker, you’re likely to misunderstand Paul’s advice on how human relationships are now to function. If you’re not sure that the Creator God exists, or you don’t want to adjust your life to be a Follower of His Global Masterplan, this chapter is not for you. Chapter 7 is in light of, and stands on top of, what Paul has already said in Chapters 1-6, and it should be understood as part of the whole message.

Assuming that you do believe that the Creator God exists and has a Global Masterplan for the future of His image-bearers, if you believe that we were created to operate in His likeness[a], and that we’re on a life-long journey to achieve His pipedream design, then a basic place where adjustments/ change can start, is in our human relationships.

Following Jewish custom, Paul assumes that men would have one wife and that they’ll be exclusively faithful to each other. [v2] But Paul goes a step further to introduce a servanthood attitude into the marriage. The authority over the husband/wife’s body rests with their spouse. [v3-4] And, depriving one another only allows satan an opportunity to become “a cat among the pigeons”. [v5] In marriage, this is where the first cracks appear – in how you’re treating each other’s body – either through insensitive demands or through a selfish pushing away.

Paul’s radical and counter-cultural, in his outlook regarding time here on Planet Earth. He’d prefer that all wouldn’t marry. [v7] But he recognises that celibacy is a spiritual gift, given to some from God Himself. Nevertheless, if a spouse dies, don’t assume that marriage is an expected next step when self-control could be a better option. [v8-9] Picking up on Jesus’ teaching[b], Paul reiterates that divorce isn’t an option. [v10-11]

But what’s apparently new, and wonderful news (especially for those from non-Jewish background, who don’t have the same understanding or history with the Creator God),

is that there’s a spiritual umbrella over a Believing husband/wife. This covers their unbelieving spouse and children while the family stay together! [v12-14] This appears to be picking up on the original Jewish understanding, that the whole household were part of the covenant relationship (the blessings) and considered “holy” because of the Jewish head person.[c] As a Kingdom of Priests and a Holy Nation[d], the same system applies for our households, just as it applied back then.

If, however, an unbelieving spouse wants to opt out of the benefits of being attached to the believer, we’re to let them go and, as painful as it may be, we’re to divorce with ease. [v15-16] Whatever our Maker has handed to us in this life, we’re to accept as the Lord has assigned to each one. As God has called each, in this manner we’re to trust Him and walk on. [v17-20] With the foundation of our life written with the words: “Bought at a High Price”, we stand tall as free men and don’t have to worry about the condition we’re in. [v21-24] Most importantly, with so much trouble attached to marriages these days, it’s better to focus on what Father God is wanting from your life, than to feel the peer pressure, and cultural pressure, of marriage as the only/best option for you. [v25-28] The key to everything lies with this very important statement:

I don’t want to ‘blow it’ in the eleventh hour right before the clock strikes twelve. I can’t afford to work so hard trying to ‘keep the rules’ by giving up so much of my own will and desires all these years, only ‘lose it’ on the home run right before the race ends. Paul wants us to think through these sorts of issues and, using our God-given conscience, ask Father God what He wants from the investment of LIFE that He poured into us. [v36-38] When we’re free from worldly concerns and commitments, we’re more likely to be free to ‘concern ourselves with the things of God’, following God’s lead over our lives, and being holy both in body and spirit. [v32,34]

None of what Paul wrote was meant to restrain us, but to benefit us. To promote what’s appropriate and, where possible, use our free will choices to secure undistracted devotion to the Lord. [v35] I don’t want to divorce with ease, my Creator – extracting Him from the most critical issues encountered. Nor do I want to be a backseat driver in my life, trying to navigate at every turn. I want my Maker to take it over…