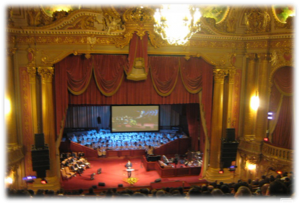 It was the fourth Sunday after our Mikey passed away, and we were sitting in an old Play House in down-town Manhattan. How we got there and why, is a long story that I wrote about in my first book Breadcrumbs in the Storm. This was Time Square Church made famous by the book The Cross and the Switchblade by David Wilkerson, founder of Teen Challenge, and I sat amazed at the roller-coaster journey that brought us there.

As I looked down at the amazing worship team from the upper balconies, I felt sorry that we’d not taken Mikey to experience such things. He wanted to be a worship leader, and had saved all his money to put himself through music school. But he didn’t live long enough to witness what was laid out before us that day. Then, almost in response to my unspoken regret, it seemed that God was telling me to look up and back. 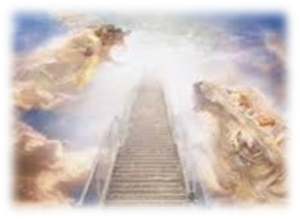 As I looked about in the glow of the stage lights, I felt sure that the walls and the ceiling of that beautiful theatre had no limits for the Creator God and His “bigger picture”. With His insight, the stage on that Sunday morning was surrounded by a great cloud of witnesses going up and out as far as my eyes could see.

Mike may not have sat with us, experiencing a wide variety of worship styles, but in God’s presence, he was experiencing much, much more.[a] And now the writer to the Hebrews (people who knew about the spirit world), reminds his readers that…

“…since we are surrounded by such a great cloud of witnesses, let us throw off everything that hinders and the sin that so easily entangles.” [v1]

Ok, wow – that’s a thought for the next time I think that no-one’s watching me! That’s one way of looking at it and a way to “put the screws on us” to not misbehave. But the writer wasn’t just saying that our behaviour is not hidden nor is it in secret. He wanted us to view our journey through this life, in the same way as an athletic on the track surrounded by cheering fans… 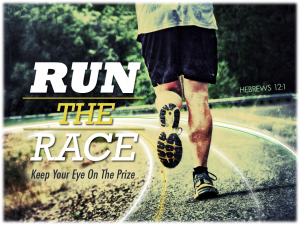 “…let us run with perseverance the race marked out for us, fixing our eyes on Jesus, the pioneer and perfecter of faith…Consider Him who endured such opposition from sinners, so that you will not grow weary and lose heart.” [v1-3]

Father God is a father and he wants His children (those He made in His own image), to be encouraged to succeed; to press forward and to be like Him.[b]  So, using words of encouragement from ancient times – from Exodus, Deuteronomy, Proverbs and Haggai – the writer to the Hebrews shows us who’s team we’re on…

“My son, do not make light of the Lord’s discipline, and do not lose heart when He rebukes you,  because the Lord disciplines the one He loves, and He chastens everyone He accepts as His son.” [v5-6]

Of course, as our children grew up, I wouldn’t discipline the neighbour’s kids. I’d wait until they went home, then I’d tell my kids all the things they did wrong, warning them not to behave like that when they go to people’s houses. If those kids acted badly, I wouldn’t want my kids associating with them and I was likely not to invite them back. I didn’t love them like I loved my own kids. If they grew up reckless and did badly in life, I would be glad that my kids didn’t get mixed up with them.

Father God is no different in His way of parenting – He’s working with us in team. He wants His children to stay away from trouble, keep clear of trouble makers, and behave in an appropriate way that pleases Him as Father. So, apart from the great cloud of witnesses (our Father’s friends who are also on our side watching us – just as our friends are watching the behaviour of our kids), there’s our coach – Father God Himself. He wants to see us grow up to be like Him, so, the rest of this chapter is unpacking this truth.

While the neighbourhood kids run away and say that they don’t like your Father because He’s too bossy, you know Him intimately. You know that He may appear gruff on the outside but when you get to know Him, He’s soft in the middle. That’s why you endure hardship as discipline because you know that God is treating you as His children.” [v7]

Because “…God disciplines us for our good, in order that we may share in His holiness…” [v10], the writer to the Hebrews calls us to grow up as responsible family team members: “Strengthen your feeble arms and weak knees…” [v11] “Make every effort…” [v14] “Don’t fall short…” [v15]

Although we don’t come to our Father God as they did in ancient time (such as in the Book of Exodus) in fear and trembling. [v18-21] We come instead to a joyful assembly through a mediator who speaks LIFE. [v22-24] 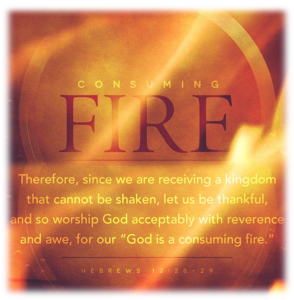 Having said that though, the writer to the Hebrew uses words to prompt memories. He takes his readers back to Exodus 23:20-22 where the journey first began – “See, I am sending an angel ahead of you to guard you along the way and to bring you to the place I have prepared. Pay attention to him and listen to what he says. Do not rebel against him; he will not forgive your rebellion, since my Name is in him…listen carefully to his voice and do all that I say…” With such memories, he then warns them again:

“See to it that you do not refuse Him who speaks. If they did not escape when they refused Him who warned them on earth, how much less will we, if we turn away from him who warns us from heaven?” [v25]

Since I’m part of the team who are receiving a kingdom that cannot be shaken, I want to join in that joyful assembly of thousands upon thousands of God angels. [v22] As the Autumn Thanksgiving celebrations come and go, I want to come home to Father God for Thanksgiving.[c]  And, no matter how much I weigh up the good and the bad, the positives and negatives in this life, I want to be thankful – worshipping my Father acceptably with reverence and awe. [v28]