MATTHEW 24 – The Calm before the Storm

Sitting alone in the gardens of the Dominus Flevit Church, halfway up the Mount of Olives overlooking Temple Mount, Jerusalem, was as calm and as peaceful as my UK garden is today. It was autumn of 2012 and I was lucky enough to get there before the busloads of tourists. So the small collection of quietly spoken couples who were dotted about taking photos, didn’t distract me from what I came for. 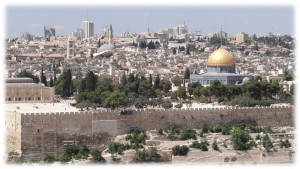 Sitting in Peace on the Mount of Olives

I’d gone to Jerusalem that year to mark the death of our only son. The Mount of Olives – with all its significance as the last free ground upon which Jesus stood at the end of His life – was one place I wanted to sit in quiet contemplation.

Like the ancient prophet Daniel had done in his greatest storm[a], I wanted to face Temple Mount as I struggled for words to say. I came armed with Mikey’s iPod that was loaded with his worship songs, and I turned it up to full volume. Being completely deaf in one ear enabled me to shut out the growing crowd, and to worship the God who gives and takes away.

With Temple Mount clearly visible across the Kidron Valley, I was able to imagine Jesus praying there on the night He was betrayed. I was caught up with the idea of how a detachment of soldiers and officials coming from the temple area and heading in Jesus’ direction carrying torches, lanterns and weapons that night[b], would have been clearly seen by Jesus long before He was “captured”. The whole east wall of the ancient city is visible from the Mount of Olives. So Jesus knew they were coming long before they arrived at the place where He was arrested.

In just the same way, Jesus could “see coming” everything that He told His friends that night. It’s since come true in one way or another. Even in recent history, the 1960s and 70s were noted for the rise in cult leaders who deceived many. [v4-5]  Wars and rumors of wars, famines and earthquakes are in our own newspapers today. [v6] Nations and kingdoms rising against each other [v7] could be said of WWII or even the more recent Arab Spring.[c] And, in their own lifetime, the events in v9-11 took place under Roman occupation in the years after Jesus’ death.

So far, the collection of warnings in yesterday’s Breadcrumb (Mark 13), or today’s chapter, has never come together in one “perfect storm”. The visions of the prophet Daniel [v15] came upon Jerusalem in AD70 when the Romans destroyed the Jewish Temple and abolished the daily sacrifices.[d] But at that time, v14 hadn’t been fulfilled.

Today, v14 has been accomplished. So, is v15 a vision of something that’s ahead of us? Certainly v21-22 seems to be pointing to an event that the world has not seen the like of – an event where no-one would survive had the days not been shortened.

But today’s chapter is really about the motive for Jesus telling His followers. [v25]  He’s protecting His Followers from being led astray by the brilliant counterfeit that’s coming. [v24]  He’s also heading off the unexpected, and the disorientation that’s caused by an EF5 tornado ripping through everything we’d previously thought was secure. [v32-35]

“…see to it that you are not alarmed. Such things must happen but the end is still to come… All these are the beginning of the birth pains.” [v6,8]

While every generation in the past 2,000 years have wondered if “this is it”, when the time comes for the Epic Play to come to an end, it’ll be absolutely clear and no one will be in doubt. [v29-31] Like every generation, while I’m enjoying the calm before the storm, I’ve a responsibility to understand my Maker’s storyline as it’s come to me from ancient times.[e] As one of His image-bearers, I’ve a responsibility (regardless of how good or how bad my life is), to understand the stage role He’s expecting me to play. I’ve got until the lights go out on the last scene in His epic saga, to get my act together. [v45-51]