MARK 7: THE PROBLEM WITH RELIGION

I’ve been to more than 80 countries and some, several times. So, I feel confident, perhaps more than most, to make general observations about human experience from what I’ve personally seen and heard. I’ve noticed one fascinating thread that runs through every country on earth – the existence of Faith. This can be expressed in varying ways such as a faith in the theories put forward by science to give us understanding and orientation. Then there’s various types of religious expressions to give us a moral compass; or Faith in a supreme Creator who gives us a future and a hope.

By the time Jesus came out on centre stage, more than fifteen centuries had passed since the time of Moses – that’s the guy who compiled the first five books of the Creator God’s Handbook for LIFE. During those centuries, the greatest minds in history had worked and reworked Moses’ Law. Every “loop hole” was found in each generation, and “stitched up” with an almost unbreakable twine: the “tradition of the elders”. [v1-5]

By the 1st Century AD, the situation was so airtight, and religious leaders (the Pharisees and Scribes were Lawyers, trained in their national laws taken from the original set laid down by Moses) were so focused on keeping the outer stitching intact, that they’d forgotten what was inside – the actual words of the original message (the heart of the message and reasoning behind each rule), and why their Maker had given The Guidebook to begin with. So great was the problem that, about 700BC, the Creator God sent a message through the prophet Isaiah [a]…

“These people honour me with their lips, but their hearts are far from me. They worship me in vain because their teachings are merely human rules.” [v6-7]

The problem wasn’t with the Creator God giving guidelines for maintaining a good relationship with Him. The problem arose in the years after that – when the behaviour of the humans involved, pushed the guidelines away from relationship into religion. Neglecting the original advice from the Creator God, they “changed the goalposts” to run after the man-made traditions. [v8] The result: any worship of any deity becomes a thing of the lips, when our hearts are incapable of being close to the deity we serve. [v6] At best, it’s a disconnected relationship and, how will that ever be successful? How can one meet the standards of that deity?

No matter how many prayers I pray; hours of mantras or in meditation; no matter how many worship sites I visit or meetings I attend, the problem is that religion (any religion anywhere on the planet) can’t bring permanent and lasting change to my heart. I’m continually breaking the Law consciously and sub-consciously in my thoughts, in my words and in my actions.[b]

If my heart is not completely transformed, I’ll not be in a position of beginning any hope of achieving religion’s rules. While we gauge our spiritual attainment on outward appearance via religious or moral expression, the Creator God has only ever been interested in our heart.[c] The heart fosters thoughts which determine the behaviour displayed in one’s life-style. A long-term, permanent, re-birth to my heart – aligning it with the heart of my Maker – will change my thoughts and, in turn, recalibrate my life-style. When my Maker reveals the truth about my true self, in relation to Him, I’ll begin to know how to follow Him…

Even after spending time with Jesus for months, His disciples still didn’t get it. The problem with religion is that it falls short of transforming me within. [v21-23] If my thoughts are corrupt (even in my dreams over which I have no control), I need outside help! After looking at religion in all its forms in the 80 countries that I’ve been to, educated reasoning has deduced that only my Maker can sort me out. HIS-story gives me reason; being His image-bearer, created to be like Him, gives me purpose; His Guidebook for Life gives me my moral compass, and His global MasterPlan gives me an Eternal future.

What’s incredible is that the Creator God has opened up His offer of assistance (His salvation plan that tackles the long-term negative affects of the inner deterioration at my core) not just to one nation, but to the whole world. The Syrophoenician woman, in today’s chapter, from the region of Tyre and Sidon (Lebanon), received hand-outs of grace and blessing from the Creator God. [v24-30]  But there’s two reasons for this that you may not have spotted…

First, the Creator God is her Maker, just as He is the Maker of the Children of Israel whom Jesus is referring to, in His responses to this lady. [v27] It is within the Creator God’s desire to bless “all families on earth” beginning first with one man (Abraham) and his descendants, and then all nations on earth.[d] And, what greater “blessing” is there in all the world, except that our relationship is restored to full working order with the One who specifically made us in His own image to be like Him. But there’s another reason for this random lady’s free access to what’s in the Hand of Living God. Long before Abraham, Noah (a follower of the Creator God), blessed his three sons saying:

The three boys populated the planet after the global flood. So, you could say that each third of today’s population could trace their DNA back to one of these three sons of Noah.

This is an ancient puzzle piece that predates our modern rivalry between Islam, Judaism and Christianity over who’s got “the right story”. I want to draw your attention to it now, because it explains why so many random Believers from every nation on earth are accessing “the crumbs” of the Creator God’s MasterPlan that fall from “the Children’s table”. [v28]

Abraham was a descendent of Shem who had received the Creator God’s blessing i.e. an intimate working relationship with his Maker.[e] Muslims and Jews both trace their DNA back to Abraham. The Jews (beginning first with Moses, who compiled the first five books of HIStory) inherited the first the Creator’s Grace along with His grave warnings.[f]  But if Japheth has been given divine permission to “enlarge” (multiply and spread out) but to also “dwell in the tents of Shem”, it stands to reason that at least another third of the world’s population (though probably inflated to much more) have been given permission to show up, without any further human permission, and enjoy free access to the family inheritance along with the heirs of the blessing.[g]

With the door open, anyone with the DNA from Japheth can just walk right in and help themselves to the spiritual food, not just on the children’s table but in the fridge and cupboards as well. They have free access to sleep under the blanket of grace, or open up any of the Holy books on the family book shelf, and even sit there translating them into their own language! It’s literally “free-for-all” as they celebrate with songs praising of the One who invited them in. And, as contemptuous, annoying, or even as infuriating as that may be to the original children, nothing can be done about it because “the owner of the tent” made the provision in HIStory. But how are they gaining access?

The secret to accessing a relationship with the Creator God (and thereby gaining free access to everything He’s been offering His image-bearers since HIStory began),

is hidden in the story of the deaf mute, in today’s chapter. Relationships are based on speaking. We’ll often say “we’re on speaking terms”, or “we’re not on speaking terms” when describing our relationships. If we can’t freely speak to someone we can’t say we’re in an open relationship with them. HIStory shows that the Creator God spoke to Abraham and Abraham spoke to God. Jesus said that, in the future, many will come saying that they did this and that in His Name but He’ll say, “I never knew you; depart from Me….”[h] For our Maker to know us, we need to open our mouths in His direction and make ourselves intimately known to Him.

Likewise, for us to know Him, we need to hear from Him. The problem that I see with religion, as I’ve travelled about for more than three decades, is that it preoccupies us so much with doing, that we’re not listening. When we’re deaf to our Maker’s calling on our lives, and deaf to His Word[i], we’ll neither hear nor understand the relationship that He has with humanity and we have with Him. 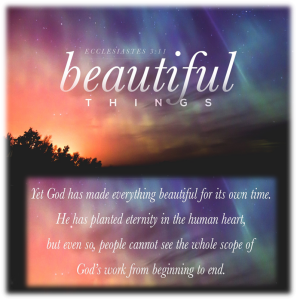 So then, I need my mouth and ears to be miraculously healed for me, in order for me to have an open relationship with my Maker. [v34] Once this happens, I’ll be on the starting blocks of beginning to understand what He expects of my life as a healthy image-bearer, created to be like Him. As the Jews said of Jesus back then: He has indeed “made everything beautiful”. He’s also set eternity in our hearts, without which mankind won’t find out the works that the Creator God has done for us, from the beginning to end.[j]