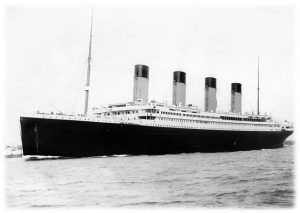 A classic movie, that seemed to be perfectly created at the time, was Titanic. Because our ship, the MV Doulos, was in the Guinness Book of Records for being the oldest passenger ship still afloat (built two years after the Titanic), our charity was approached by the makers of the film. But they wanted to take the Doulos out of service for six months to use her in their filming, and the disruption in our charity’s primary goals was too much to agree to. The movie went on to be a blockbuster and the rest is history. But if you’re wondering whether the RMS Titanic sank because it hit an iceberg, think again. It sank because of a false sense of security.

Today’s chapter is a detailed record that has been kept, quite miraculously, these past 25+ centuries for us to read today. If kept in such perfect order, it must surely be worth a closer look so that we can learn from past mistakes. But like the people toasting to their achievements aboard their “unsinkable ship” Titanic, I can’t imagine how destruction could overtake a nation – or even our nation today. Yet here lies the irony: both complacency and a misguided sense of security seem to be foundational building blocks for trouble. After that, it’s a process of dismantling what originally made the nation strong – piece by piece.

Zedekiah’s first mistake took place in the chapter before, where he’d miscalculated rising powers around him. In his case, it was the rising power of the Empire of Babylon that was his downfall. But I’d be doing you a grave injustice if I were to suggest that the destruction of the nation of Israel – which happened about 587BC – started here.

HIStory started with these words: “In the beginning God….” The Creator was the author of the beginning of everything we see and experience. He’s the beginning and the end.[a] So to understand what’s really going on in today’s chapter you have to go back to when Israel first became a nation. 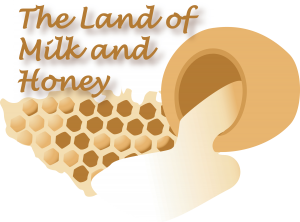 What made the country great in the first place? What did it looked like back then? What did the people believed in and how did they conducted themselves to make a strong community underpinning their society?  Before you can understand what went wrong, it’s worth knowing that this very chapter was predicted by the Creator God 1,000+ years before – in the Book of Deuteronomy Chapter 28.

Looking again at why the RMS Titanic sank, the problem (apart from bad leadership) wasn’t in the fact that outside forces brought it down, or that there wasn’t enough lifeboats. The problem was in the fact that they didn’t think they needed water-tight compartments above a certain deck on an “unsinkable ship”. It was a safety precaution in a half-way measure.

So, when Father God said to His people in Deuteronomy 28: “If you fully obey the Lord your God and carefully follow all His commands I give you today, the Lord your God will….”, He was putting in place a water-tight compartment of solid steel. Positioned from the grass-roots lowest level to the highest levels, it wasn’t to stop half-way. Nor can it be softened in time, undermined or even removed by some future generation who thinks it’s outdated and no longer necessary. With this “shield against the elements” in place, Israel wasn’t just going to be an unsinkable ship, she was to float like a flag ship high above all other nations experiencing ridiculously divine favour in every way.[b]

“However, if you do not obey the Lord your God and do not carefully follow all His commands and decrees I am giving you today, all these curses will come on you and overtake you: You will be….” [Deuteronomy 28:15ff]

By the time HIStory had worked itself through to today’s chapter, only eight kings out of twenty bothered at all with their Maker’s Handbook. This is like saying that only 8 in 20 Presidents of the United States bothered with the foundational building blocks laid down by “the founding fathers”. So, after years of bad leadership, and corrosion of what mattered (the hull of their ship with its water-tight compartments), there’s little wonder that the nation sank!

Reading this story in the comfort of 21st Century life, it’s perhaps easy to be under the illusion that we’d be different today. If we had “divine prophecy”, received several times from different quarters, just as King Hezekiah had[c], it’d be taken seriously. Perhaps put on file as a future threat to national security from a specific country. Each successive country leader, and those charged with our protection, would be made aware of any threats that were considered serious or imminent.

Yet we have been warned![d] And, just as they lost the detailed record in the past[e], we too have shelved the warnings as outdated, or (in the same approach taken for the Titanic), likely not to happen. The problem something that’s “likely not to happen” is that it “could” happen and therefore could happen “at any time”.

Nebuchadnezzar was by now an expert in dismantling nations. He shackled the leadership and silenced anyone willing to put up a fight. [v4-7] He dismantled and destroyed the Faith system that originally made the country strong, along with undermining all other places where authority and order came from. [v9] Finally, he broke down dividing walls, dislodging the people from their original context – what was normal and taken for granted. Then, mixing them up, he integrating them into his multi-faith, multi-cultural empire. [v10-11]

In a world where global trade, international travel, and the WWW give momentum to the huge push for integration, inclusion and tolerance, “rising powers” can be less obvious. But instead of looking above the waterline, it’s worth focusing on what’s happening beneath us. Israel crumbled from beneath and it started by her own people in a previous century. Then, a succession of leaders and policy setters gradually weakened what they stood on and stood for at a core, foundational level.

Knowing this, we need to keep watch, carefully calculate the changes in our culture and environment – in particular the changes in the policies of our country leaders – then stand firm.[f]  But here’s something more to this chapter that you may not have realized, and with it comes the reason why we’re to stand firm…

The Temple in Jerusalem was destroyed twice. First, in today’s chapter, in the days of the Babylonians and then again at the time of the Romans. 655 years had passed between the time it was first dismantled and carried away [v13-17], and the same event in Roman times, around AD70. But here’s the weird thing that can only point to the involvement of a higher power who’s in charge of the script – although 655 years apart, and two entirely different empires involved, it happened on the exact same date in the Jewish calendar! This August 1st (beginning at sunset on July 31st) – the 8th anniversary of our Michael’s departure – will be 1947 years since the last Temple was dismantled. Next year will be the 70th year since Israel became a nation in 1948, and it will be 1948 years since God’s last Temple was dismantled.

Now some say that there isn’t a Temple today, but there is.

It’s one that the Creator God has been building for the past 2,000 years.[g] Because the God who made the world and everything in it, is the Lord of Heaven and Earth and does not live in temples built by human hands[h], His Temple of the Holy Spirit is made of living stones.

First the living Stone—rejected by humans but chosen by God and precious to Him—then we also, like living stones, are being built into a spiritual house to be a holy priesthood, offering spiritual sacrifices acceptable to God.[i] That being the case, is it now likely (since it happened twice before) that this Temple too will be dismantled and “seized/kidnapped”, “snatched”, “taken away/carried off”, “raptured” – to God’s Kingdom, just as Jesus predicted?[j]

Although this may only be information to take note of, we’re called to “keep watch”.

And now we close the Book of the Kings of Israel amid shocking distress, predicted in horrific detail and coming true, just as the Creator God said it would. All other events in this chapter – including the execution of the priest and prophet, Zephaniah [v17-26], author of the incredibly significant Book of Zephaniah; not to mention the disappearance of the famous Ark of the Covenant – only shows that they’d passed the point of no return. And yet the author of HIStory is still in charge. I can’t therefore finish with you thinking that the topic of the day is about Destroying a Nation. While this is the context, such things are only the backdrop for our Maker’s GRACE. That being so, I can’t help but notice that Father God is still Father – even to clearly disastrous children – such that this book ends with His notation of grace.

Regardless of being “the last king alive whose behaviour destroyed a nation”, Jehoiachin was released from prison. He was given a seat of honour higher than those of the other kings who were with him in Babylon. He put aside his prison clothes and for the rest of his life ate regularly at the king’s table. [v27-30]

Although Jehoiachin’s benefactor appears to be the King of Babylon at first glance, is it not from the mouth of the Most High that both calamities and good things come?[k]