EXODUS 6 – Life with a Stutter

One of my favourite movies is The King’s Speech. In addition to giving me the chance to see into the world as it was before I was born, I’m captivated with the story of a weak and vulnerable king being empowered by an empire who loved him – perhaps, and even all the more, precisely because of his stutter. I wonder had he not had an impediment, could he have outspoken an incredible speaker such as Hitler.  At a time when it seemed crucial to have strong world leaders, Hitler’s greatest opponents were an American who couldn’t walk and a Brit who couldn’t talk!

Like King George VI, Moses, in these early chapters of the Book of the Exodus, seemed caught “between a rock and a hard place”. If his own people refused to believe him, how on earth would Pharaoh? [v12] But God knew something that Moses didn’t know. In that most critical moment, the “faltering lips” was precisely what was needed. In fact, in this case, had Moses not had his stutter (and hadn’t used Aaron to “translate” for him), he wouldn’t had stood out as someone particularly special. He’d be treated like any other normal human over whom Pharaoh had full authority.

As difficult as life can be with a stutter, and as amazing it is that such “disabilities” don’t impair our Maker’s ability to use us, this is only one pair of lenses through which to look at this chapter. The real story is about the God of the Universe at loggerheads with the king of the Greatest Civilization of Earth. It’s all about the Creator wanting to redeem a people for Himself – the very thing that Pharaoh had specifically identified as something that he didn’t want to happen.[a]

In order to redeem a people for Himself, the Creator God begins to reveal something very important to His epic plan for this world – something that begins here and carries through to the end of the world – He’s using His “mighty hand”. In fact, it is because of His mighty hand that Pharaoh will drive them out! [v1]

Now, at this stage in the Script, this doesn’t sound like interesting information. Of course the Creator would use His mighty right hand to do anything and everything – just as we use our hand to reach out and get things done. So, I want to suggest to you the “my mighty hand” is a person. Someone who will has already come out on stage a few times already. Someone who’s role and identity will be revealed as this epic Play continues.

For now, the Creator God is revealing bit by bit as any good playwright would. For one thing, our Maker is so complex, we’d not be able to take it all in had He not spoon fed us in tiny bits. So, like a flower slowly opening or an onion being peeled to reveal the next layer, today’s chapter reveals a new layer to our Maker’s Name. [v2-3]

Previously, in Act 1 of this epic Play, we saw significant divine intervention is HIStory, where the Creator known in the Book of Genesis as El-Shaddai: “The Lord God Almighty”.

So, before we get off the starting blocks, we need to know that our Maker is the Omnipotent (all-powerful) Maker of Heaven and Earth. If you believe in The Big Bang Theory, then you’ll understand Him as explosive in His creative power. In the storyline so far, we’ve seen the Creator doing some pretty scary stuff already.[b] Abraham added to this understanding of our all-powerful Creator by calling Him the Judge of all the Earth.[c] But by His name, the Lord[d], He did not make Himself fully known to them. [v3]

Again, this bit-by-bit revelation is important to us today. It is right that we should understand our Maker for who is, first and foremost, The Lord God Almighty; God Most High[e]; or as the Ancient Chinese called Him: Shang Di: the Supreme God. When thinking of this appropriate level of respect, King Solomon of Israel once said:

In addition, the Creator is not limited in any way and is therefore transcendent. He transcends, for example, time, space and even HIStory. This means that He’s capable of being relevant in any age. He’s capable of moving forward with us (or more accurately, we spend our days catching up with Him), yet His Word is the same yesterday, today and forever.[f] So beneath the layer of Lord God Almighty, is the next revealed layer: our Maker’s name “I AM” and “I WILL BE” everything we’ll ever need.

Six times in this one chapter He said: “I AM the LORD”. This is why He’s angered by Moses being caught up on the minor issue of life with a stutter. [v12&30] From this point on in the storyline, the audience watching on can fully trust this Creator God to be there for us. And, because of both His almighty power and outstretched arm, He’s capable of be everything we need in this timeframe, and this day and age. He’s a modern God who’s present in the present – not a dinosaur from the ancient past who used to be relevant, or someone special, but who isn’t now.

So, what’s He promising?

He’s promising to bring us out of the yoke of slavery, free us and “redeem us” – which essentially means “to buy us at a price in order to set us free”. 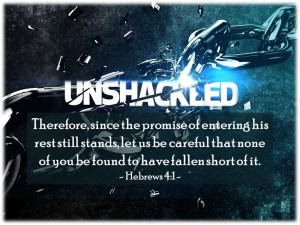 He’ll take us as His own people to a place prepared in advance for us to go. He’ll be our God and we’ll be His people. This inheritance can only come about through His “outstretched arm”, and with mighty acts of judgement. [v6-8] I said “us” and “we” here because, what the Creator God is doing here in this chapter for a family, a people group, and a nation, is the very essence of HIStory – His entire Play from beginning to end.[g]  This is what He has planned all along for the whole world – for anyone made in His image to be like Him.

The rest of today’s chapter is a recap of who’s on the stage – who’s alive at the time. It also firmly puts this scene at a specific place in history by identifying Moses and Aaron – along with their authority in the community – through identifying their family line. But as the chapter closes, two more things are revealed, which are still relevant for us today if we’re to understand and unpack the Creator’s story.

Throughout HIStory, the Creator has had a continual problem of finding someone willing to be His ambassador – people who are willing to speak out His message when “prophecy” is difficult to live with. This especially means someone who hasn’t got a speech impediment i.e. they’ll accurate represent without faltering on what their Maker has said, and they’ll not be afraid of possible problems or consequences in saying it. [v30] Another spanner in the works for the Creator God’s global plans is the age-old issue of who’s willing to listen. [v9] What’s bizarre, is that those who should be the first to listen, won’t…

“Who has believed our message and to whom has the arm of the Lord been revealed?” [Isaiah 53:1]