EXODUS 4 – Qualifying for the Impossible

Settling down in a comfy chair for a good read now, it’s worth going back to Exodus 3:11 to get the full impact of this “conversation of reluctance” that Moses is engaged in, with the most powerful being in the universe! It makes me wonder at how many times I’ve kicked on the floor, like a spoilt child, before my Maker – or, sat in a corner refusing to move. It’s clear from the script that, in his life after murder, Moses didn’t think himself qualified to take on the impossible. But when you take a moment to understand the lengths that people have gone to since ancient times, just to “appease the spirits”, some may say that Moses’ responses are little short of shocking! 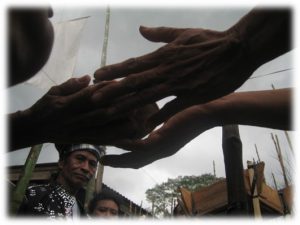 play Eastern music, or strategically place certain rocks or religious statues around their gardens in order to keep the peace. A young friend of ours went to the jungles of Peru to go through a series of “tribal cleansing rituals” in the hope to restore his equilibrium and he’s not the only one. There a growing trend each year for seekers of this sort of retreat/healing experience.

But, yet again, the Creator God is exactly the opposite of any of the gods or spirits that we’re either following or keeping at bay. He is in every way like any good human Father. Speaking face-to-face with the Creator God, first 12 verses show a very patient “tutor” equipping Moses in Faith. First, the Creator addresses what Moses is leaning on. [v2-5] He then tests Moses faith in himself. [v6-7] Finally He empowers Moses over the environment. [v8-9] In all these, the Creator shows Himself to be all-powerful. In patience, He our Maker acts like a human Father. In fact, at the beginning of the story, the word man, human or mankind were all new words for the term “an image of God”.[a] So, if we have an idea of what a good Father is, then act like it, we’re actually acting like God – in His likeness just as we were created to do.

So the patient conversation that He is having with Moses in today’s chapter, is similar to the safe, patient, controlled and, dare I say, “normal” conversation that Abraham had with the Lord on the hillside overlooking the cities on the plain.[b] The normality of speaking directly with our Maker, continues in the same way for other ancient prophets, like Elijah, who interact so simply and “normally” with the Creator God.[c]  Jesus later explains what a normal “prayer” should look like.[d] Our Father, who sees and hears us, is with us – our job is simply to go…

Like any human Father-child relationship, however, Father God also disciplines the ones He loves.[e] So when Moses told God to “send someone else”, it isn’t at all unexpected that the Lord’s anger burned against him. [v14-15a] But with a level of unearthly perseverance, Father God leads Moses firmly by the hand just as a shepherd would coax a lamb from deep within a thicket.

And just as Father God expects nothing from us without His Holy Spirit’s power to accomplish it[f], the Lord equips Moses with His divine power in order to do the impossible. [v16-17] On-looker may look at examples of Obedience in the past as “The Insanity of Obedience”. But Moses’ God doesn’t leave him to “plan his next move” without twice revealing the seriousness of what’s ahead. [c3:19-22 & c4:21-23]

Having said that, there will be odd things happening throughout this epic storyline that won’t make sense to us. If the 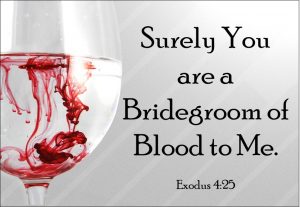 Creator is indeed as loving as the Script says, then the next scene in this chapter is one of those confusing moments. Having mobilized Moses, God then almost killing his son! [v24] Moses wife quickly circumcises her son with a flint then, falling at Moses feet (with the foreskin still in her hand) she calls him a “bridegroom of blood”! [v24-26]

Processing this in the 21st Century, is difficult. We don’t know Ancient Midianite culture for one thing, and even my suggestions are probably wrong. But if I were to sit here trying to explain the behaviour of the Creator God to you, here’s what I’m thinking…

After this incident, it appears that Moses realised the seriousness of his mission, and the danger that he was bringing his family into. He seems to have sent them home because they’re not part of the story until Jethro brought them out, months later, to the camp of Israel in the desert.[h]

In the meantime, God is at work in the hearts of Moses brother and the elders of the Tribes of Israel. 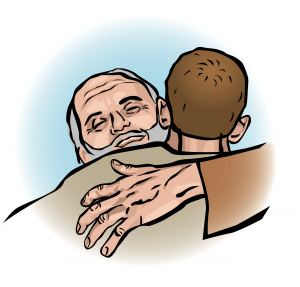 Contrary to Moses’ fears, Aaron is told (ahead of time) to meet his brother on the way. [v27-28] After his rather shocking “slap on the wrist” moment, this unexpected meeting with his brother on a random desert mountain 80 years after the family split up, must have been a heart-warming for Moses – a confirmation from a loving Father God that he was on the right path. Then another “sigh of relief” came when the elders accepted the story outright! [v29-31]

So what have I learnt from a story from the ancient past? Well… many centuries later, a shepherd boy who became King David of Israel wrote:

“Even though I walk through the darkest valley, I’ll fear no evil, for You are with me; Your rod and Your staff, they comfort me.”[i]

So if I want to engage in a real way at any level with the Creator God – not in the way I fancy; not with gained qualifications in mind, nor according to my dreams of self-actualization; and not influenced by my mortal, egocentric, distorted and incomplete understanding of who He is – and if I want to qualify for the impossible (the chance to be one of my Maker’s Ambassadors here on earth), I will experience both His guiding shepherd’s staff of love, as well as His rod of discipline. He wouldn’t be my Father God (in the best possible way that a perfect God should be), without both.