Most playwrights will agree that the success of their show depends heavily on the stage and scenery.

Get the lighting and the props right, and the atmosphere is set for an awesome storyline. If the set is falling apart, or incompatible with the storyline, it won’t matter how well the actors perform. The show management have already let them down before the first Act is through.

In the same way, the Creator God set about creating for us the elements of a perfect future when we laid down the foundations of the universe …and then… He began HIS story in and through human HIStory.

But the first question to come up before any modern reader gets past the first sentence is: Wait, what about evolution? Haven’t we discovered that Genesis Chapter 1 is out-dated, and proven now as some sort of myth that worked only as long as people were uneducated enough to believe it?

Well, the most intelligent of Scientists out there today, will never get away from the fact the Genesis 1 – handed down orally by so-called uneducated shepherds, then put into writing by another shepherd (a run-away son of a slave) named Moses – just so happens to follow the exact process of life production. This is what our daughter (a 21-year-old student nurse) once wrote to me:

Genesis was written before scientists understood this equation yet the three days in Genesis was scientifically correct. God made the world in the stages which complement science. You can’t have Day 3 without having done Day 1 and 2 in that particular order.” Laura Knight

The first three days the Creator reorganises the earth, creating it into what we have today. During the next three days, He populates it. First He populates the heavens with the sun, moon and stars. Then he populates the sea, sky and land. But Genesis 1 doesn’t stop there, and now there’s a “glitch” that can easily be overlooked. Perhaps it’s something that we hope no-one notices, now that we’ve said that the stages covered in the first three days complement science.

On Day 2, the Creator is unapologetically saying that He “…separated the waters which were below the expanse from the waters which were above the expanse; and…God called the expanse heaven.” [v7-8] This word “expanse” means sky, vault or space and can mean the earth’s atmosphere where the birds fly i.e. “…let birds fly above the earth in the open expanse of the heavens.” [v20] In this case, we’re only talking about the separation of water on the ground with the water in the clouds and we can move on. 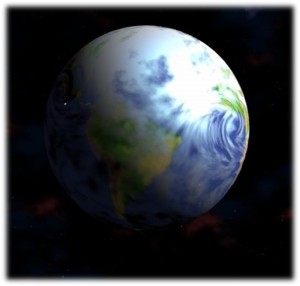 So now we have a problem. If He separated the H₂O to lift it up vertically so that a dome of H₂O was above the sky – the place where the birds fly but also the place where the sun, moon and stars are – then where did that water go? Was it a humid eco-system of green-house mist? Was it a gravity-defying dome of water? It’s not there today. With a great storyline up to that point, why (when You’ve written so clearly, repeating Yourself several times) would a clever Creator God make such an easily-spotted blunder?

Some may wonder what’s the big deal. Surely I’m complicating things. In a world where they didn’t know our atmosphere ended, when you look up and see the birds, the water (clouds) and the sun, moon and stars, isn’t that what it means by “the expanse of the heavens”.

Literary Scholars say that Genesis 1 is written in poetic form. Its literary style is clearly different to the narrative prose of Chapter 2. In other words, it’s a Preface to a relationship story between a Father and His creation. It’s not meant to be some sort of 21st Century scientific statement. If this was an epic Play, Genesis 1 is a poem about the stage while Chapter 2 is the actual start of Act 1 Scene 1. This is an incredibly important notation that deserves full attention when discounting the Creator’s Story in preference to believing in the theory of Evolution that’s been put forward by humans.

Having said that, though, I believe that Father God says and does every single thing, deliberately. He doesn’t do random. Every minute detail in His Script, has meaning and purpose. It’s been written and preserved now for close on four millenniums for a very specific (and often complex) reason. So, right at the very start, the God of relationship, who created us in His own image, will be looking for people who’d believe Him – even when, at first glance, His story isn’t exactly easy to understand.

This apparent “glitch” in the Story of Creation has interested me for many years. To unpack it, I’m planning a third book titled Thirst. In the meantime, and if you carry on with my Breadcrumbs, you’ll come across some of what I’m thinking when we cover Genesis 6 in a few days. For now, we’ve come to the icing on the cake…

After all the incredible things ever conceived, that we’re still discovering even in modern times (such as Finger Monkeys in the Amazon Jungle), Father God outdid Himself and created a creature in His own image to be like Him. [v26]  Now if this isn’t shocking enough, both men and women were specifically designed to RULE:

“So God created man in His own image, in the image of God He created him; male and female  He created them. God blessed them; and God said to them, ‘Be fruitful and multiply, and fill the earth, and subdue it (cultivate it); and rule…’” [v27-28]

With a blueprint design, conceived before we came into being, to be equal co-rulers, humans – both male and female – were to rule over everything in their environment by bringing their different masculine and feminine slant to the project. We’re not the underdogs. We’re not the victims of our circumstances. The design for both male and female humans, from start to finish, was to be our Creator God’s representatives here on earth. With the preferred food-chain set [v29-30], the task that we were purpose built for, was to rule over whatever He sets before us.

This is the crucial piece of evidence that sets the scene for everything that follows in the next 66 books of the Creator God’s Epic Play. The perfect God – who later gave specific instruction not to make “an image in the form of anything in heaven above or on the earth beneath or in the waters below”[b] – was in the process of creating a perfect future when He did the unthinkable. He created living beings in His own image and in His own likeness, so that what’s displayed on the outside and what’s processing on the inside of us, is like Him.

Finally, after saying “…and God saw that it was good…” six times[a] while creating a perfect future, the God who specializes in perfection (the God who’s unable to put His stamp of approval on anything that’s sub-standard and not 100% perfect), then said on the seventh time that it was “very good”! [v31] He had baked His cake, flavoured it, iced and decorated it with everything conceivable, then He finished off with putting His cherry on top. Like the bride and groom ornaments atop a beautiful wedding cake, Father God added His own image-bearers to His masterpiece. Everything He then saw of His creation in its finished state, was now “very good”.

Father thank-you for making me in Your own image. Help me now to conduct myself this year in Your likeness to be like You. As a daughter is just like her Father, or an ambassador is the exact representation of the one he is representing, help me enter this year as someone who is born into Your family so that I take charge and rule over my circumstances with my Creator’s complete authority.