If you’ve been following my Breadcrumbs from the beginning of the year, you’ll have noticed that I’ve now looked at chapters in the first five books of the Creator God’s Guidebook for LIFE – the “Book of Law”. I then skipped forward in time about 1,500+ years to cover a moment in HIStory where that Law was fully fulfilled.[a]

Today’s chapter is now the last chapter in this epic storyline, where Jesus lived on earth – moving about to fulfil and permanently seal up, the Creator God’s Law. HIStory was recorded and explained by close friends (disciples/followers/learners) who followed Jesus around like sheep following a shepherd. But, without a shepherd, the sheep will scatter. And so, today’s chapter (set in the period immediately after Jesus died at the hands of the Romans), now fulfils yet another ancient prophecy:

“‘Awake, sword, against my shepherd, against the man who is close to me!’ declares the Lord Almighty. ‘Strike the shepherd and the sheep will be scattered, and I will turn my hand against the little ones.’” [Zechariah 13:7]

Without Jesus around to give His “sheep” direction, Simon Peter (one of Jesus’ three closest friends) suggested returning to their former life – symbolised in fishing. [v2-3] But Jesus had already “prophesied” trouble when He told them that “…No one, after putting his hand to the plow and looking back, is fit for the kingdom of God…”[b] So it’s little wonder that they had no success that night.

With that said, though, there’s nothing wrong with being a fisherman and it doesn’t mean that everyone will have trouble fishing. It simply means that when our Maker catches our attention for a season, but after which we lose direction, we must avoid the temptation to turn back to the familiar, the easiest, and what we’d once left from our old way of life.[c] If we turn back, we’re likely to both disappoint the One who created us and called us to be like Him, but also to encounter problems. 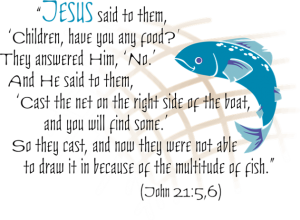 In this epic Play, this scene shows a group of scattered sheep. But the Great Shepherd hadn’t given up. After showing them what they were looking for [v4-8], Jesus gave them what they ready needed. [v9,12-13] And, yet again, I notice all the detail in the script. If this was a fairy tale, designed to make the local people believe a lie, John wouldn’t have said “153 large fish” when such a number would have surely broken the net. [v11]

If today’s chapter is based on fact – as things really happened – then, today’s chapter is also about a shepherd who didn’t abandon His sheep.[d]  It takes place in the days after Jesus was seen alive in Jerusalem [v14], and before the promised Holy Spirit came.[e]  Before ascending into heaven, Jesus is seen by as many as 500 people on several separate occasions when He came back to life, and He performed many other signs not recorded in this book.[f]  The reason seems clear. Yesterday Jesus was restoring peace.[g] Today, He’s restoring purpose.

At this point in HIStory, disaster had struck and, if there was any purpose at all, the Creator’s Global MasterPlan had surely crumbled into the dust. But Jesus knew the Creator’s ancient storyline, and He was still the living representation of the Word of God – even in this fishing scene…

“He humbled you and let you be hungry, and fed you with manna which you did not know, nor did your fathers know, that He might make you understand that man does not live by bread alone, but man lives by everything that proceeds out of the mouth of the Lord.” [Deuteronomy 8:3] 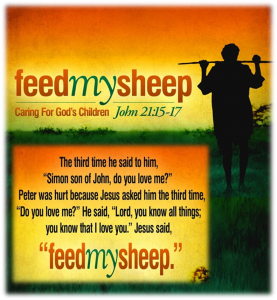 Jesus’ mind was on feeding His sheep. And this was not just the twelve, but the global sheep that Peter was to begin leading. [v15-17] What’s amazing, is that Jesus begins to restore direction with instilling purpose into His “right-hand man”. This was the one who was “the rock upon which Jesus would build His church”.[h] But he’s the same person who abandoned Jesus just days earlier by denying on oath three times that he didn’t know who Jesus was.[i]

So, when Jesus told Peter, some time back, that we’re to forgive others seventy-seven times[j], He gave us, in today’s chapter, the greatest example ever to be recorded. After three short years of teaching and training into the King’s service – teaching these hand-picked boys the language and literature of the Kingdom[k] – Jesus entrusted the salvation of the world into the hands of people who couldn’t be depended upon.

Trusting the future of the global population into hands of a few uneducated sheep, was a 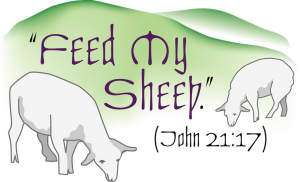 plan that should surely have been doomed to fail. But the Creator God knew our capability as His image-bearers, designed and purposed to rule over our environment. All we have to do is what we were only ever asked to do from the beginning: to “follow Him”. [v19] But what’s this 1st Century breakfast on the shores a Lake Tiberius to do with me today?

I’m not to head off aimlessly to do whatever I currently fancy, like the boys in today’s chapter. Nor am I a mindless sheep, 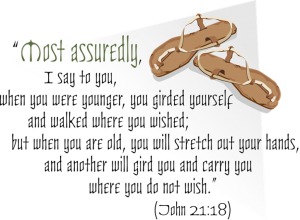 set free to wander where the grass leads me. I’m a complex machine with a higher purpose. I’m to dig deep into my DNA in search of the One who made me to be like Him. Just as the Foot and Mouth outbreak in the UK was a disaster (not only did farmers lose their sheep, but the new sheep, purchased at market for the Cumbrian Fells, would take 3-4 generations for territorial instincts to be restored), I want to be territorial. I want to know instinctively where my Maker stands, then stick close to Him…

This section in my Breadcrumbs, known as The Gospels – “Good News” – which has been following how Jesus could have fulfilled the Creator God’s Law  for us in every way possible, can’t be concluded without one more note. John finished his book by saying:

“Jesus did many other things as well. If every one of them were written down, I suppose that even the whole world would not have room for the books that would be written.” [v25]

In 2011, I was profoundly encouraged by these words. I had toyed with the idea of writing down what Father God that done for me through Jesus and through His Holy Spirit. But I was intimidated by two things: the number of books that have already flooded the market; and, the clever people who have written them. Who would buy my book/s when there’s so many to choose from and, written by much better authors?

But John reminded me that the Creator God transcends both time and space. He can’t be contained. And, it is precisely because of this that stories about Him, impacting people like me, are limitless. So, on the basis

of the fact that it really doesn’t matter who reads the stories – John’s book is part of a library of personal stories forming the world’s longest-running Best Seller, and yet many refuse to buy it – my writings please my Heavenly Father. My books and my website add to the fulfilment of Zechariah’s prophecy that, through the Creator God’s sheep, His peace will be spoken of to the nations, and His dominion (His place of active involvement and rule) will be from sea to sea; from the River (in Israel) to the ends of the earth.[l]