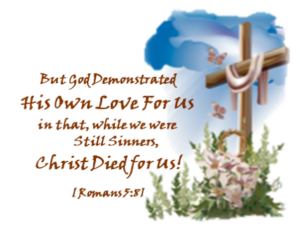 This is the fourth time in my series of Breadcrumbs that I’ve covered what’s now known as The Easter Story. For one thing, four books in the library collection of the Bible cover that one event in great detail – right down to the content of private conversations. The fact that this detailed story, recorded in 4D, has been protected so that we can read it today, makes me believe that it must be important.

For example, parts of the New Testament (the last third of the Bible that was written after Jesus) have been miraculously preserved in more manuscripts than any other ancient work. We have over 5,800 complete or fragmented manuscripts in Greek, 10,000 manuscripts in Latin and 9,300 manuscripts in various other ancient languages including Syriac, Coptic, Ethiopic, Slavic and Gothic. The oldest fragment of papyrus manuscript is from John’s book and it dates back to AD125.

By covering this one history-changing event over four weeks of my Breadcrumbs, I’m also overlapping the period when our Easter and the Jewish Passover are “out of sync”. As I write this in 2019, our Easter and the Jewish Passover have come and gone. Today’s chapter, however, covers the last 6+ hours in the life of a homeless carpenter, one a Friday in the 1st Century AD.

Incredibly enough, this one event has been talked about, argued over, studied, and sung about, on a continual basis without a break for the past 1991+ years! People in every nation on earth today, who have no natural ties at all to this insignificant Middle Eastern country (that, by the way, wasn’t even a recognised country for 1878 of those years) are unyielding in their claim that this carpenter is both their King and their Sovereign Lord. 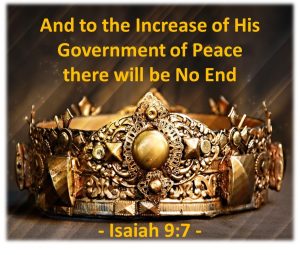 When the Roman soldiers twisted together a crown of thorns and put it on Jesus’ head, then clothed Him in a purple robe before going up to Him again and again, saying, “Hail, king of the Jews!” [v2-3], they were acting “prophetically” – in fulfilment of many fragments of ancient prophecy. But the Romans also believed in “the sons of the gods” just as Nebuchadnezzar, King of Babylon, had done six centuries earlier.[a] So, upon hearing that the only accusation against Jesus related to Him being the Son of God, Pilate, the Roman governor, was even more afraid [v8] and tried to set Jesus free. [v12]

This was a critical moment where Father God’s plan could have come undone – had Pilate’s superstitious “fear of the gods” caused him to authorised Jesus’ protection. [v8-10&12] On the day the changed history forever, and for the sake of saving a remnant of humanity, the Creator God kept quiet. [b] He didn’t rescue Jesus and, in fulfilment of prophecy, Jesus had no intention of rescuing Himself. [v9-10] So Jesus gave Pilate no answer, except to free him from ultimate guilt…

“You would have no power over me if it were not given to you from above. Therefore the one who handed me over to you is guilty of a greater sin.” [v11]

It’s clear, from the record, what this Roman Governor understood as Judge presiding over these events. In the absence of anything that could be found that Jesus had done wrong, the verdict and written charge against Him (that Pilate had nailed to the cross in three languages), was and has only ever been since, a matter of His identity. [v14,15&19-22] Even the bit about Jesus’ clothes [v23-24] was recorded by John to reveal Jesus’ identity.[c] 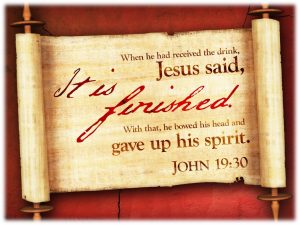 If that isn’t enough though, the wine vinegar [v28-30], the absence of broken bones – contrary to Roman policy [v32-33&36] – and the pieced side [v34&37] all fulfil two millennia of Law and ancient prophecies.[d] With nothing found that Jesus had done wrong, we’re now able to say with confidence what John the Baptist once said: Jesus is our one perfect sacrifice – the Lamb of God (without defect) who takes away the sin of the world.[e]

Even on the cross, Jesus continued to fulfil the Law[f] by honouring His mother – making sure that she was taken care of [v25-27] – even though He’d not “live long in the land” nor did it “go well with Him” as that original commandment had promised.[g]

With life ebbing from Jesus, I’d be surprised if a lot of thought went into who would look after His weeping mum – now that her husband and oldest son were gone. This last “departure from culture” may have been because He knew His brothers’ lives were in danger after He left. Or, perhaps the apparent absence of His brothers that day, when He need them most, inclined Him to think that she’s be better taken care of by someone like John who wasn’t afraid (of the Jews or Romans) to be publically seen at the cross. John may have been her nephew or simply that he was youngest disciple – perhaps unmarried with no other responsibilities – and, therefore, had the capacity to look after Mary.

And still the level of detail continues. If anyone has a question over Jesus’ death (did He die or just faint so that He could later escape from the tomb) – and, just in case you’re still thinking that anyone would survive a Roman flogging, crucifixion, and a spear thrust up under their rib cage – John’s record of a sudden gush of blood and water from Jesus’ side [v34] is a sure sign of the separation of clot and serum after death.

While all that should captivate anyone who’s remotely interested in the Creator God (or His Epic journey through four millenniums in search of Human Image-Bearers who’d hear, listen and turn to Him), every time I read this story – no matter how familiar it is – I find new things, as seemingly random details catch my attention…

Twice that day, the Jewish leaders were concerned for their precious Passover Feast. First they wouldn’t enter Pilate’s palace because they’d be ceremonially unclean.[h] Then they wanted all the bodies removed from the crosses so as not to spoil (taint or defile) their Festivities. [v31] But two from the ruling class were willing to risk their lives by going to Pilate – after the riot this Governor had to deal with earlier that day. They risked their reputation and risked their place in government, when they risked being publically seen at the cross taking care of Jesus’ body. [v38-42] 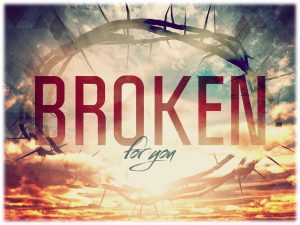 Joseph of Arimathea and Nicodemus didn’t just take their lives into their own hands that day. When they showed up with seventy-five pound (34kg) of embalming ointment (an incredibly costly gesture), then touched Jesus’ dead body, they disqualified themselves from being part of the Passover! In other words, they chose Jesus over their Law. They broke the Law at its most significant point, in order to do what was right.

So, as I go about my day now, and go onto such mundane tasks like vacuuming my 21st Century house, I’ll probably wonder what their significant part means for us today. If it were true in WWII, for example, that people had to break the written law in order to do what’s right before God, I wonder what written laws will I have to break in the future?

For the One who kept quiet while He gave up everything for me, including His own life, what will it cost me to take a similar course of action that Joseph and Nicodemus took that day? How far will I go and what am I willing to risk in order to stand on the side of my Maker? Will I keep quiet and go along with the crowd[i], or will I openly show my allegiance to Father God and to the One He sent – whatever that may cost me?