I certainly don’t want to be disliked or cause actual back-lash. I’m happy for people to know that I follow Jesus and, maybe even think I’m weird, but hey, to each his own, right?! Yet there’s a line that I shy away from crossing, if it creates tension, being disliked, or gaining all-out enemies! So I’d rather not mention what God wants at all, if it means “upsetting the apple cart” in what humans want.

I want to package up the Creator God in a sweet wrapper (dipping Him in chocolate to disguise the rough edges) before handing Him out. So today’s chapter starts with a great humanitarian aid story. Generously feeding a load of people, is the sort of story that wins friends today. But doing something miraculous in addition, is even better. Jesus broke a small amount of bread yet fed 5,000 men – not counting women and children. Afterwards, they picked up so much unused bread. [v9-13] Then, walking on water and having a bunch of fans chasing you about the country, is just the sort of stuff that draws more crowds and sells newspapers today.

But the Creator God isn’t in need of winning friends and influencing people, and John already wrote that Jesus didn’t entrust Himself to anyone.[a] If so, then what is the Creator God up to?

He doing nothing, in today’s chapter, that’s different to what He’s been tirelessly work at from the very beginning: He only ever wanted all families on earth blessed through HIStory.[b] 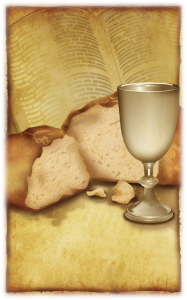 The epic storyline took 2,000 years to get to today’s chapter. In short, the Creator God used and accepted Jesus body, broken for us, in one perfect sacrifice, in order to provide Eternal LIFE for the masses. So, just as He provided bread for 5,000 after Jesus prayed for it, our Maker loved the whole world that He’s provided long-term spiritual sustainability for everyone without cost or restriction.[c] And, just as His disciples picked up 12 basketfuls of discarded pieces [v12], I’m convinced that at the end of HIStory, His angels will be able to collect up “an abundance of GRACE left over” from what’s been discarded, unused, not wanted, and rejected.

But feeding people, on a physical level, and claiming something spectacularly more on a spiritual level, are two very different things. So Father God gave us more stories (more testimonies from intelligent people at the time) for us to weigh up. If, for example, He parted the Red Sea for two million +/- of His people to walk across on dry ground in the Book of Exodus, then He can certainly walk on water and calm the sea. [v15-21] If I’m to believe one story, I have to believe the other because this is the transcendent God that I’m following. HIStory makes no excuses for the incredible. The whole lot requires faith. If I can’t believe that He fed 5,000 or walked on water, how on earth will I believe that He’s not just offering Eternal Life, but He’s capable of providing it.[d]

If I understand that Jesus is the Living Word, as John said He was at the start of this book, then feeding daily on God’s word is normal for spiritual growth. Taking on board Jesus life and death so that it’s within me – in the depths of my being (to a point where without the presence of His Word, I’ll shrivel up and eventually die spiritually), is what Jesus meant when He said:

“…I Am the bread of life; he who comes to Me will not hunger, and he who believes in Me will never thirst… I Am the living bread that came down out of heaven; if anyone eats of this bread, he will live forever; and the bread also which I will give for the life of the world is My flesh… unless you eat the flesh of the Son of Man and drink His blood, you have no life in yourselves…” [v35,51&53] 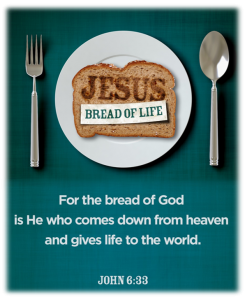 The key words here are: “…no life in ourselves…” And, in this, every atheist on the face of the planet are right: there is no life in ourselves and, leave it up to us, our end is permanent death. We live one life and there’s no hope at all after that of eternal life. This is where the Creator and Lord of Life has provided something utterly revolutionary for those whom He created in His own image. This history-changing move wasn’t just for one family or one nation, but for a whole world of people that He created to be like Him.

While I may be tempted to contextualize the Creator God so as not to lose friends, Jesus deliberately enter into the crowd with a winnowing fork in His hand. He doesn’t baulk at losing half His audience, as He separates the wheat from the chaff.[e]  Like a corporate head-hunter, Jesus seems to focus on building a team with a certain calibre of people[f] – those who are willing to stick around long enough to at least ask more questions. So, what questions have been raised and answered in John’s book so far?

As a Jew writing to Jews and thoroughly educated in the script from a young age, John was probably aware of The Angel of the Exodus[g], and was therefore confident in saying that Jesus was the Living Word of God.[h] But to get any further than that statement, requires faith[i] – even if we don’t have all the answers neatly stacked in boxes. It’s the sort of faith that’ll stretch to believing that our Maker so loved the whole world that He gave His only Son[j] in order for us to have LIFE.[k] All of this is true, if Jesus came bearing the Creator God’s Name – God’s name in Him[l] – and if He was doing the work that Father God sent Him to do, just as the script said of Him as far back as when the journey began.[m]

That being so, today’s chapter explains how the manna, that Father God fed His people on in their wilderness journey[n] was a physical representation of our spiritual food – His word, which is food for our soul.[o]  It’s why I called my website, and these daily notes, Breadcrumbs. Each day the people went out looking for divinely provided “bread”. So I’m hoping that you too will find manna from heaven through my Breadcrumbs. 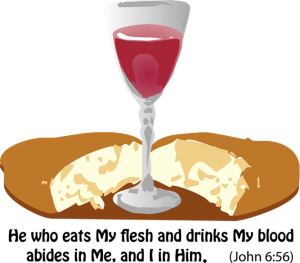 If John is right, and Jesus is the Living Word, then He’s the physical representation of what it’ll take for us to be sustained into Eternal Life. But it was at this point that Jesus lost almost all His following. [v60] Unable to get their head around the metaphoric symbolism, they thought Jesus was talking about cannibalism! This wrong understanding was at the back of the Roman assault, over the next couple of centuries, against Followers of The Way who had been called Christians.

While the issue of cannibalism was swimming about in the minds of these 1st Century Jews (and the issue of an insatiable need for proof that continues to remain impossible to satisfy even today), when the people asked for a sign to prove Jesus’ authority [v30], He simply answered with that one illusive thing that humans have struggled with from the first pages in HIStory: Faith in His word…