I wasn’t so much amazed that I was standing on the actual steps of the Pool of Bethsaida featured in today’s chapter (as incredible as that moment was), I was stunned at the seven foot wall of rubble and trees that had grown up to fill it in! It was September of 2012 and I was in Jerusalem for five days on a sort of “pilgrimage” to mark the three-year milestone of our son’s departure.

Mikey wanted to be a worship leader and, if he lived in King David’s day, I’m sure he’d have wanted to join King David’s music team. And so, as events had carried me, I found myself standing in the bight Middle-eastern sunlight perhaps on the very spot that Jesus had once stood. My brother, sister-in-law and I had just resurfaced into daylight after walking in total darkness down King Hezekiah’s 750m-long water tunnel. The shaft was built to bring water from the Gihon spring under the old city, and to empty it into a beautiful pool that had been surrounded by five covered colonnades. [v2]

Surveying the ruins that day in 2012, made me shake my head in wonder as I found it hard to believe what went wrong. If the moon – which is apparently millions of years old, according to some – only had a thin layer of moon dust on it when Armstrong first walked on the moon, how could this site be so completely buried after only two millennia?

I wondered if there’d been a serious earthquake or landslide. Did the Romans deliberately fill in every prominent site in Jerusalem, in a hope to obliterate even the memory of this city? Perhaps if I were a parent of a murdered son, I’d probably want to fill in and cover over the place where my beloved son suffered. So, was Father God behind covering over all the places where His Son had been threatened [v18], in order to wipe out bad memories? Whatever happened after Jesus was there, we at least know from today’s chapter that this was no ordinary pool. 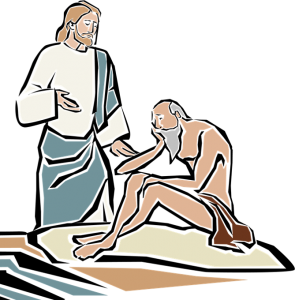 In the years after King Hezekiah had built his water tunnel and this pool was created, people had come to believe that it was a healing pool. Superstition had caused people to think that an angel from heaven stirred the surface of the pool and, the first into the water would be healed. With no real medical relief for many illnesses, perhaps Father God had kindly healed those looking for help in this way. Whatever the success rate, by the time Jesus came along a great number of disabled people lay waiting there – one man had been waiting an incredible 38 years! [v5]

Yet again, Jesus did the astonishing and it wasn’t healing the man. The extraordinary thing He did was to ask the man if he wanted to be well. [v6] It seems peculiar to ask such a ridiculous question but, as always, Jesus sees passed the obvious to get to the real issue. If the man was healed, his life would be dramatically changed. With no more handouts, he’d be expected to achieve what every other male image-bearer are responsible to achieve – and most of that “by the sweat of his brow”.[a]

Seriously, if life involved lying about by a pool under a covered colonnade, who’d want to work for a living! Not really answering Jesus, the man simply explains why he’s not already healed – blame the water, blame the other invalids, blame everyone else to explain why he’s still there. [v7]

In our social welfare society in the so-called Christian West, we can also live comfortably by a pool expecting help and blaming others or circumstances for why we’re incapacitated. But Jesus knew the blueprint design of a male image-bearer and what he could be capable of. So, His response in the text appears to be short-tempered: “Get up!” He said (with an explanation mark), “Pick up your mat and walk.” 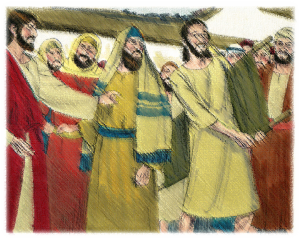 Bizarrely enough, getting a man off welfare after 38 years and into the working world, contributing to society after creating a platform for him to reach his full potential, doesn’t seem to matter to the religious leaders! They’re so caught up on their religious rules about what day of the week it was (and that carrying a mat was considered to be work), that they can’t see this bigger picture. [v9-16]

The derogatory connotations behind the words, “…Who is this fellow…” are associated with the way they spoke of Moses.[b]  But rather than debating rules, Jesus taught on the authority of the Son. In doing so, He reveals His identity. [v17-18] If anyone said that Jesus was nothing more than a good teacher, He couldn’t have been – if He claimed equality with God. If anyone calls Him a prophet, He couldn’t be – if He’s deluded into thinking that He’s much, much more. Either Jesus is indeed who He says He is [v19-23], or else He isn’t. There’s nothing “good” in between because He leaves no room for “a middle ground”. He lays His claims on something so “out of this world” that it could be difficult to categorize it in your local library between Sci-Fi, thriller, or serious horror… It includes the world’s greatest grave robbery! [v25-29]

But how can Jesus make such ridiculous claims about His role in Father God’s storyline. If someone else stood up after millenniums of storyline to make such claims about themselves, how can we be sure that their story is right and other stories are wrong – regardless of how many people believe in the other stories?

Well, Jesus isn’t saying anything that’s not already been said by the Creator God, who said it at the very beginning of the journey…

“ Behold I’m sending ‘My angel’ ahead of you to guard you along the way and to bring you into the place which I’ve prepared. Be on your guard before Him and obey His voice; do not be rebellious toward Him, for He will not pardon your transgression, since My Name is in Him…truly obey His voice and do all that I say…”[c]

If the Creator God put His own Name inside this “person” in the days of Moses then Jesus is not speaking out of turn if He is indeed that same person. Jesus came in the Father’s Name [v43a] and said: “By myself I can do nothing; I judge only as I hear, and My judgement is just, for I seek not to please Myself but Him who sent Me.” [v30] Then, according to Jewish Law that requires two testimonies for something to become fact. So, Jesus calls out the testimony of John the Baptist. [v33-35] But since this is human testimony, Jesus calls on His works (past and present) as proof [v46] and finally Father God and His word as further proof. [v47]

John wrote his book after Jesus had lived, died and rose again. He already began piecing together the fact that Jesus had the ability to bring people back to life[d], He brought life from a tomb[e] and, when Jesus died many graves had already been opened.[f] As I go through my Breadcrumbs, I’ve become convinced that it’s easy to see what’s right before our eyes, if only we care to look deeper for proof. HIStory has been carefully protected for us to read today and, if we care to read it, pick it apart and piece together the puzzle pieces, we’ll see that Jesus came from our Father God, not just to help us to get up and walk, but to bring us LIFE…