If to really “entrust”, is to assign responsibility to another for doing everything needed, as well as putting ourselves into the care and protection of another, then

what does my FAITH in my Maker look like? Is it a form of religious expression of “Faith” i.e. going regularly to a religious site, reading a certain religious book, and praying prayers to a deity. Or, is it the sort of “trust” that fits the description of trust? It’s easy to want the Creator God’s care and protection (forgiveness, eternal salvation and daily needs), but quite another definition applied when it comes to keeping all the authority and responsibility for “doing life” to oneself.

After several days of going over the same story – the crucifixion of Jesus known as The Easter Story – you’re probably tired of hearing about it! Today we’re starting the Book of John and it’s worth mentioning that the guy who wrote this book is different from John the Baptist who comes out on centre stage for a short time at the beginning of Part Two of the Creator God’s Epic Storyline. [a] Before he gets beheaded, John the Baptist’s role was to be messenger “…to prepare the way for the Lord…”[b] But John, in today’s chapter, is one of the 12 close friends of Jesus – His disciple. John may have been the youngest of the 12. He was the brother of James (the sons of Zebedee), and possibly Jesus’ cousin.

If you’ve been following my Breadcrumbs, I’m hoping that you’ve seen something different in each record of Jesus’ life and death. Through four different lenses, your understanding of what the Creator God did to change history, should be deepened. For example, you may remember the Road to Emmaus story (in yesterday’s Breadcrumb) at the end of Luke’s book. Well, woven into the fabric of the storyline was an extremely important gemstone that “sets the scene” for John’s book:

“Then, beginning with Moses and all the Prophets, He (Jesus) explained to them what was said in all the Scriptures concerning Himself.”[c]

But if the Prophets lived centuries before Jesus, what could they have said? If Moses contributed the first five books of the Bible, what could Moses have written about Jesus? Well to answer that question from yesterday and then follow my breadcrumbs for the next 21 days, I need to backtracking a bit. On March 1st we covered the first chapter of John book where he connected Father God’s epic storyline back to the beginning of HIStory…

In taking us back to the beginning (back to what Moses had written), John explains that the Creator God’s Word was with God in the beginning. And of course it would be – unless we worship a God who’s speechless! Through His Word all things were made; without The Word nothing was made that has been made. [John1:3] With The Word is LIFE and that life is the LIGHT of men (humankind).[d]

So, up to this point, all three world religions who believe in the Creator God, agree. God’s Word was with Him in the beginning and it’ll stand forever with Him until the end. However, things start to get tricky when John says, “…The Word became fresh and dwelt among us…” [John1:14] The human form of God’s Word is the true light [John1:9] and, just like the spoken word and the written word before Him, this Living Word was not recognised or welcome. [John1:10-11]

In the Day’s of Moses, God’s Word was known in part: “…listen to His voice and do all what I say…”[e] In time, the Creator God has revealed Himself to us fully through His Word [John1:18] – orally, written, and finally unveiled in person.[f]  The latter was the last straw after history (as it comes down to us through HIS-story), showed that sacrificing His Living Word to fulfil His written word was the only solution for the problem of “sin”. [John1:29]

This is what we’ve been talking about since March 1  as Part Two of the Creator God’s Epic Play has been unfolding. But before we’ve even got two pages into John’s book, he’s made some incredible claims, and it’ll take the rest of his book to unpack them! Because of this, I’ll be covering every chapter of John’s book in my Breadcrumbs for the next three weeks. It’s the only book in the Bible that will have every chapter featured in my Breadcrumbs. The fantastic part of the Good News “Gospel” Message (accomplished by The Word for us, and the reason why John wrote his book in the first place), is that…

“…as many as receive The Word, to those who believe in His Name, The Word  gave the right to become children of God – children born not of natural descent (or human bloodline), nor of human decision or a husband’s will, but born of God.” [John1:12-13]

With that said, John begins his account of what happened in the early part of the 1st Century AD, but he writes differently to the other three authors that we’ve already looked at. John is clear that Jesus is The One that they’d all been waiting centuries to see. [John1:30-34] So, John writes with confidence from the framework of LIGHT and LIFE [John1:6] – which, as it happens, are products of TRUST that has been born out of an intimate knowledge of, and relationship with, God’s Word. 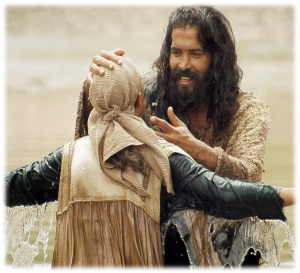 Just as water covered the earth in the beginning, John’s book starts with Water Baptism, to symbolize sin being washed away. [John1:19-28] This is a public demonstration of what happens inside someone after they say sorry to Father God and “repent” – committing to a permanent 180˚ lifestyle change in their words, attitudes, and actions. Gaining divine forgiveness becoming clean, has always been a matter of trust.

John the Baptist then publicly identified Jesus as the “Lamb of God who takes away the sin of the world”. But in Jewish Law, two witnesses are needed for the testimony to be true. So John called God’s Holy Spirit as his second witness in confirming Jesus’ identity. [John1:31-34]

The rest of Chapter One is the familiar story of Jesus beginning to draw His team together in Andrew, Peter, Philip and Nathaniel, and two things are worth mentioning here. Before Jesus experienced Peter’s failings (as you’ve seen over the last couple of days of breadcrumbs in the Easter story), Jesus predicts that He’ll build His church with Peter as a foundation stone.[g] Philip’s words as also noteworthy: “We’ve found the one Moses wrote about in the Law, and about whom the prophets also wrote—Jesus of Nazareth…” [John1:45] But if Moses and the Prophets made predictions, what did they say? 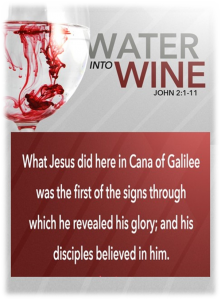 In Chapter Two, John chooses to cover the now famous story about Jesus changing the water in wine – a story that the other writers haven’t included. [v1-11] I think it’s interesting that Jesus called his mum “woman”. [v4] This is the title that Father God gave to Eve, so it’s not derogatory. Never-the-less, it still shows a detachment beginning. At 30, and now no doubt head of the home after Joseph died, Jesus is showing that His future is with Father God, and His ties are cutting from His earthly connections. His response to Mary translates to: “What is this to do with you, or to me, since my time has not yet come.”

Still, to honour Father God, also included fulfilling the Law. And, bound by Jewish Law to honour His Father and Mother[h] – especially after Mary put Him on the spot [v5] – Jesus then goes ahead and fixes the situation anyway. [v6-11] In response to Mary’s trust (that He could do something to save the day), Jesus acts on her behalf. But this was never about saving the embarrassment of a host at a wedding.

John is looking deeper than “magic tricks”. Just as it was with the Father and son in the story, Father God saved the best until last. [v10] He first sent the prophets and then finally He sent His Son.[i]  Jesus is the new wine poured out for us. And so, by choosing to record the first miracle of wine poured out, John weaves scenes together towards Jesus’ last and greatest feat: His blood poured out for us[j], for the forgiveness of sin. It would be a time and place very shortly where water and blood would be separated again, when Jesus’ side was pierced for our sake.[k]

So it seems clear after just two short chapters, where John’s going with this book. Jesus is on a mission and while it may include influencing people, no time’s been given to winning friends. [v14-17] The horizon is already visible by the second chapter, and it includes Jesus’ one perfect sacrifice. [v18-22] Whatever was to lay ahead in the next three years of Jesus’ life, one thing was sure up front: only Father God, the Master Planner and Author of HIStory, could be trusted. [v24]