What’s interesting with this epic storyline, is the different pieces of information that can be found in all four records that we have today. Luke was a non-Jewish doctor and he was writing to a Roman official…

“Therefore, since I myself have carefully investigated everything from the beginning, I too decided to write an orderly account for you, most excellent Theophilus, so that you may know the certainty of the things you have been taught.” [Luke 1:3-4]

So in addition to this fantastic fanfare that brought Jesus to Jerusalem riding on a donkey – in fulfilment of the vision seen by the ancient prophet Zechariah[a] – Luke records Jesus sadness.

When a leader has been appointed to leadership without consensus from the people, he/she has an uphill climb. This may continue to the end of their role. Moses, who came from noble birth, arrived from a distant country to have himself appointed leader.[b] Although he came with signs and wonders, he had an uphill battle. The people grumbled against him and God, for the entire duration of his leadership – until he died.

I’m telling you this because Luke mentions a story, which he inserts right before what is now known as The Triumphant Entry. This wasn’t part of our reading this morning, but mentioning it now will put into context where Jesus knew He was at with the people. [v11-15]

The king in the story came from a distant country – just as Moses had been sent, and just as Jesus was sent here by God the Father.[c] Both Moses and Jesus came from a distance to assumed leadership and both were to return back to where they came. Now look at Luke’s story in v12&14 – the king came but the people said “We don’t want this man to be king.” He was made king, however (probably a higher authority was involved for this to happen without a war, and it happened with or without the vote of the people), then he returned home.

Jesus was telling this story about Himself. He knew, before He rode into Jerusalem that day, that He had the authority of the One who sent Him – just as Moses had before Him. But two things were also true: the people would rebel and, where He was going wasn’t His final destination.

So today’s reading starts with v28: “After Jesus had said this, He went ahead, going up to Jerusalem…” In this context, what is now known as Palm Sunday began with great joy and celebration. The people wanted a coup – relief from the negatives of their current life experience. Shouting “Hosanna!”, which means “save”, Jesus was the son of David  that they’d hoped for. His Dad’s name was Joseph, Joseph’s Dad was Jacob[d], and Jesus’ name was Yeshua – a variant of Joshua which means “He saves”. Everything seemed to be falling into place wonderfully. 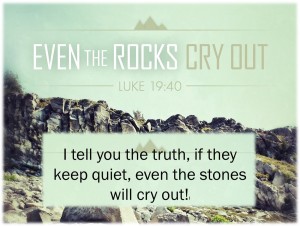 With full authority now and, knowing that He only had five days left, Jesus didn’t mince any words with the religious leaders: “I tell you, if these become silent, the stones will cry out!” [v40] But the thing that brought tears to His eyes was the rejection ahead of Him and around Him [v41-42], and what that would eventually do to the collective whole who failed to recognise the “time of God’s coming to them”. [v43-44]

This was prophetic. The events predicted by Jesus actually happened and the clue was in the stones. [v44] History shows that Rome destroyed the city in AD70. Their campaign included throwing down ancient building blocks off the wall. If you go to the Davidson Centre in Jerusalem today, the piles of stones are still in heaps at the base of the Temple wall. The excavations show 18 inch pathing slabs buckled by the force from above.

But I want to suggest to you that, while prophecy has an immediate and mid-term element, it will always carry a long-term application – no matter how many years go by. So here’s something for you to think about.

What if we are running the risk today of missing the King who’s come to save us – just as they did. If we too, even us, had only known on this day what would bring us peace, we could have avoided the destruction that’s ahead. [v43] But since we don’t recognise “the time of God coming to us” personally and corporately – that time frame given to us all for seeking and finding Him – could we too risk that peace, that message, that hope being hidden from our eyes as a result. [v42]