It didn’t take much for me to want to commit suicide. In fact, I don’t even know where that thought came from. I was twenty-0ne and going along wonderfully. I’d come face-to-face with my Maker after the car I was traveling in careered off a cliff. Within 18 months, the adventure of faith had taken me to the other side of the world where I was working on a charity ship. But standing on the back of the ship at sea that night, looking down at the letter in my hands, those unforgiving words “…and besides, you’re no angel…” seemed to pierce my soul to the point of death. It didn’t matter what “good” I thought I could do with my life, inside, I was no angel. The reminder of being corrupted at the core, produced such utter hopelessness that I wanted to throw myself into the sea.

Matthew’s record of Jesus “final countdown” also includes the alabaster jar story. After reading Mark’s account, I talked about this in the 01 April – Additional Notes. I noticed that Jesus knew, two days earlier, that He would die [v2], even though the religious leaders were planning on putting it off until after the holidays. [v5] So when Mary unwittingly “anointed Jesus for burial” [v12], He protected her…

Truly I tell you, wherever this gospel is preached throughout the world, what she has done will also be told, in memory of her. [v13]

The incident was clearly a tipping point for Judas who left the house soon after to betray Jesus. [v14-16] But this extensive record that has been miraculously handed down to us after 2,000 years, also includes the record of the words from private conversations. [v69-75] After Jesus final meal with His friends – we’ll open that moment up on 22 April – Additional Notes – He turns to His disciples and, using the words of the ancient prophet Zechariah, He breaks the news to His closest friends that they’re all about to ditch Him. [v31] 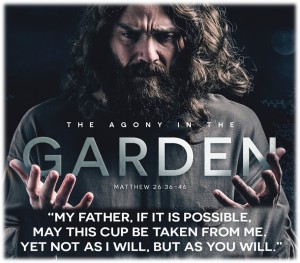 Like any of us would do, Peter doesn’t want to hear that he’s about to fail. [v33] “Even if I have to die with you,” he said, “I will never disown you.” [v35] But within a short time, it was clear that Peter couldn’t even stay awake to keep watch and pray for Jesus in His darkest hour! [v40] The spirit seems to be willing but our fleshly nature is weak!” [v41]

When Jesus’ own predictions come true, and He’s indeed arrested just as He’d been saying for months now, Peter was still trying not to fail. He followed the crowd into the temple courts and settled in – close enough to hear, but hidden enough not to be noticed. The proceedings went through to the early hours of Friday morning and, warming Himself by an open fire, Peter was spotted. In the course of time, and just as Jesus had predicted, Peter was asked three times if he knew Jesus. In the end, Peter called down curses and swore that he didn’t know the man. [v69-74]

How great is human weakness! The words of Isaiah and Jerimiah rang true that night: “We all, like sheep, have gone astray, each of us has turned to our own way; and the Lord has laid on Him the iniquity of us all.”[a] “Let Him sit alone in silence, for the Lord has laid it on Him.”[b]

The depth of hopelessness is unfathomable! “Woe to me!” Isaiah cried in ancient times. “I’m ruined! For I am a man of unclean lips, and I live among a people of unclean lips…”[c] The prophet Jeremiah etched words into history and because we still have a written record of it today, his words remain true: “The heart is deceitful above all things and beyond cure. Who can understand it?”[d]

But the prayers of the ancients have already been received and heard by the Almighty. The record of them still exists today and they are freely available as proof. Isaiah is one who prayed in advance for our continuing weakness…

“Do not be angry beyond measure, Lord; do not remember our sins forever. Oh, look on us, we pray, for we are all your people.”[e]

To address humanity’s hopelessness, only love could break the chains. So the healing balm that our Maker applied to produce lasting change in my heart, words, and actions is found now in a beautiful exchange…

“For God so loved the world that he gave his one and only Son, that whoever believes in him shall not perish but have eternal life.” [John 3:16]